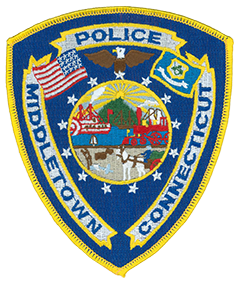 The patch of the Middletown, Connecticut, Police Department was implemented in fall 1975 as a tribute to the upcoming bicentennial. At the top, it features a bald eagle and the United States and Connecticut flags. Thirteen stars representing the original colonies—which include Connecticut—surround the city’s seal, which depicts a rich history of commerce, industry, agriculture, railroad, and shipping on the Connecticut River.