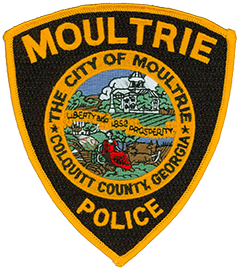 The city of Moultrie, Georgia, was named after Revolutionary War General William Moultrie in 1859 and is the seat of government for Colquitt County. The patch of the Moultrie Police Department features the official city seal, depicting the historic Colquitt County Courthouse at the top and recognizing the area’s agricultural heritage at the bottom. Each year, Moultrie hosts The Sunbelt Agriculture Exposition, the largest farm show in the United States. The black background and gold trim on the patch honors the school colors of Colquitt County High School, a source of community pride.