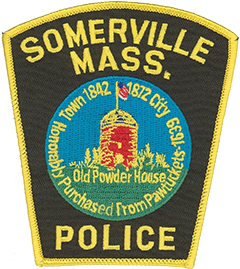 The patch of the Somerville, Massachusetts, Police Department gives a glimpse into the long and storied history of the city it serves. The innermost portion of the city’s seal is featured—at its center is the Old Powder House, the oldest stone building in Massachusetts. Built around 1703 as a windmill, it went on to hold the largest supply of gunpowder in the colony and in 1774 was the site of one of the first hostile acts of the Revolutionary War. Beneath the structure is a reference to the area’s purchase from the Pawtucket Indians in February 1639. Somerville was part of Charlestown—the oldest neighborhood in Boston—until 1842, at which point it separated to become a town of its own. Thirty years later, Somerville was incorporated as a city due to its growing population and increasing industrialization.