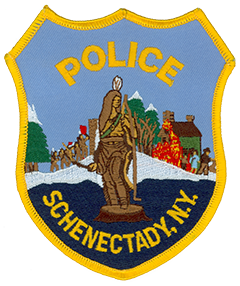 The foreground of the Schenectady, New York, Police Department patch depicts the statue of Lawrence the Indian located in the city’s historical Stockade District. A member of the Mohawk tribe, Lawrence encouraged the people of Schenectady to rebuild following the 1690 massacre that nearly destroyed their settlement. The background of the patch depicts this attack, showing a group of Indian raiders outside the stockade on the left and a family of settlers with their house ablaze on the right.