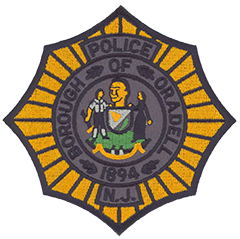 The borough of Oradell, New Jersey, originally was founded as the borough of Delford in 1894. A referendum on November 12, 1920, officially changed the name to a two-part portmanteau—“Ora” honors the Hackensack Indian Chief Oratam, a prominent peacemaker from 17th century New Jersey; and “del” refers to the borough’s initial name. The patch of the Oradell Police Department mirrors the borough seal. A bust of Chief Oratam is at the top, joined on either side by figures representing early European settlers. In the center is a bisected crest—the lower portion shows the Oradell Reservoir and Dam, while the upper part depicts a Gemini space capsule. The latter pays homage to Astronaut Walter M. Schirra, Jr., one of NASA’s original seven astronauts, who grew up in Oradell.