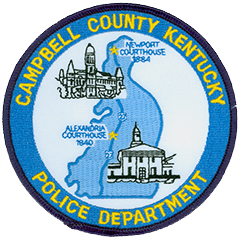 The patch of the Campbell County, Kentucky, Police Department depicts a representation of the county in its background, complete with a rendering of U.S. Route 27 traversing from north to south. Also pictured are two historic courthouses in the cities of Newport and Alexandria. The seat of government for Campbell County was moved from Newport to Alexandria in 1840, though the prior city was allowed to form its own courthouse district in 1883. As of November 2010, a state court ruled that both cities are county seats, making it one of 34 counties in United States to be dual seated.