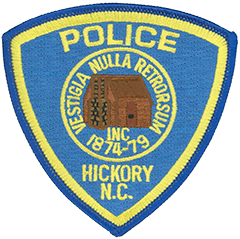 The Hickory, North Carolina, Police Department has two service patches worn on opposite sleeves of its uniform. The left-sleeve patch features a log cabin surrounded by the Latin phrase “Vestigia Nulla Retrorsum,” which translates to “Never Step Backwards.” The log cabin was known as the Hickory Tavern, and the name of the city arose from the forest of hickory trees around the tavern. The stars-and-stripes-influenced “All-America City” patch worn on the right uniform sleeve honors Hickory’s three-time win of the National Civic League’s prestigious All-America City Award in 1967, 1987, and 2007. The award was founded in 1949 to recognize cities in which citizens, businesses, nonprofit organizations, and government agencies work together to meet the community’s needs and solve common problems.