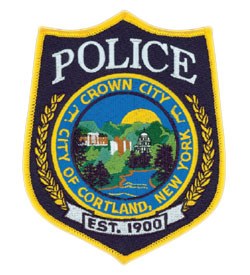 Cortland, New York is called the Crown City because of its location in the center of seven valleys in the middle of the state. The patch of its police department depicts this, as well as the city’s role in importing and exporting items by river. Also featured are three prominent buildings in Cortland.