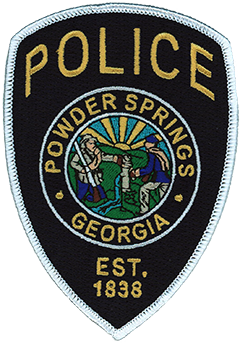 The city seal of Powder Springs, Georgia, is prominently featured on the service patch of the local police department. The seal depicts a Confederate and Union soldier sharing water at a pump. The water pump is symbolic of the mineral-enriched seven springs in the city limits that turn the surrounding sand black, like gunpowder. This distinct feature led to the city’s renaming in 1859—it was initially incorporated 21 years earlier as Springville. From the 1850s to the Civil War, the area was widely known as a health resort—some doctors prescribed a trip to the springs to treat kidney and bladder disease.