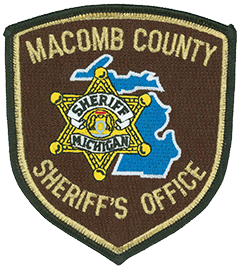 Macomb County, Michigan, was formally organized on January 15, 1818, and named after Major General Alexander Macomb, Jr., a highly decorated veteran of the War of 1812. The county encompasses 482 square miles and, with over 850,000 residents, ranks third in population in the state. The city of Detroit is located below the county’s southern border, along 8 Mile Road. The patch of the Macomb County Sheriff’s Office features an outline of the state in blue behind a six-point sheriff’s star. At the center of the gold badge is the Michigan state seal.