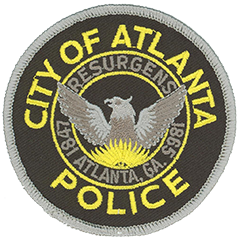 The Seal of the City of Atlanta, Georgia, was adopted in 1887, just 23 years after the city was captured and burned by General William T. Sherman’s forces during the Civil War. It stands as an enduring symbol of courage, vision, and selflessness and prominently is featured on the service patch worn by Atlanta Police Department officers. A phoenix is pictured rising from the flames of its destruction; the Latin term “Resurgens,” shown above the mythical bird, appropriately means “rising again.” The dates on either side of the seal represent the city’s incorporation in 1847 and its reconstruction in 1865.