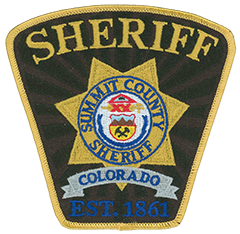 The Summit County, Colorado, Sheriff’s Office was established in 1861 by a local gold prospector who doubled as sheriff. Located in the county seat of Breckenridge, the sheriff’s office today has 73 employees across five divisions. Its service patch features a seven-point gold star with the Colorado State Seal in the center. At the top of the seal is the “Eye of Providence,” enclosed by a triangle emanating rays. Below the eye is a Roman fasces—a bundle of rods and a battle ax bound together—along with a heraldic shield. The top half of the shield depicts three snow-capped mountains with clouds above them; the lower half shows a pick and sledgehammer crossed on a gold background. The scroll at the bottom features the state motto, “Nil sine numine,” meaning “Nothing without the deity.”