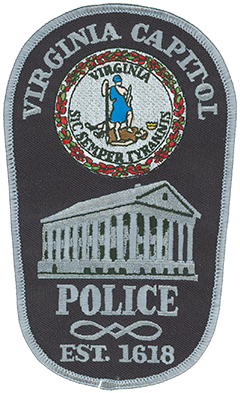 The Virginia Division of Capitol Police is the first organized policing agency in America. Its roots originate in 1618 at the first permanent English settlement in Jamestown. Based today in Richmond, the agency has evolved with the state’s seat of government over the past 396 years. The official seal of Virginia is depicted atop the agency’s service patch. The seal features a female figure representing virtue standing over a fallen male figure representing tyranny. The Latin inscription “Sic Semper Tyrannis” translates to “Thus Always to Tyrants.” The Virginia state capitol is depicted beneath the seal as it was originally designed by Thomas Jefferson in 1785. Jefferson modeled the building after the Maison Carrée, an ancient Roman temple in Nîmes, France.