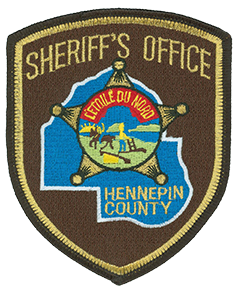 The center of the Hennepin County, Minnesota, Sheriff’s Office patch features the state’s seal, which depicts a pioneer plowing and a Native American riding into the sunset. The motto L’etoile du’ nord translates to “the star of the north,” referring to Minnesota’s status as “The North Star State.” Surrounding the seal is the sheriff’s star. Outlined in white, Hennepin County is the most populated in Minnesota and features the city of Minneapolis, its county seat. The blue color signifies the county’s 200 lakes and 3 major rivers, which cover 48 square miles.