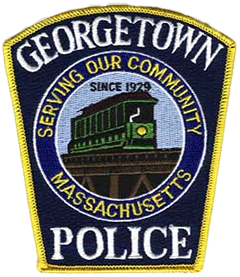 Georgetown, Massachusetts, a distant suburb of Boston’s North Shore, was incorporated in 1838, though first settled almost 200 years earlier as a part of the town of Rowley. The Georgetown Police Department was established in 1929, and its motto, “Serving Our Community,” can be seen on its officers’ service patch. The trolley that served Georgetown from 1886 to 1940 is prominently depicted as traveling over a tall trestle that no longer exists. The trestle’s former location is marked today by a housing complex.