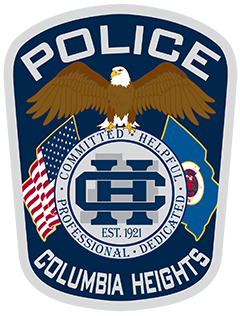 Columbia Heights, Minnesota, is a northern suburb of Minneapolis. It was incorporated as a village in 1898, then as a city in 1921. The patch of the Columbia Heights Police Department, designed in 2011 by its staff, features a central shield that depicts the agency’s core values on its edge, echoing the department’s abbreviation—Committed, Helpful, Professional, Dedicated. Within the shield is a capital letter emblem used by other city organizations, along with the date the city and its police department were established. A heraldic bald eagle sits atop the shield, spreading its wings of freedom above the United States and Minnesota flags.