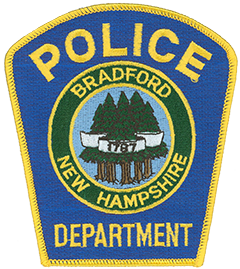 The town seal of Bradford, New Hampshire, is prominently featured on the service patch of the Bradford Police Department, which serves over 1,600 residents. First settled in 1771 the town was incorporated by the New Hampshire General Court in 1787. This incorporation date is depicted in a banner at the center of the seal. Several of the state’s tallest white pines, which grow in Bradford, are portrayed in the background. These towering monuments of nature exemplify the open forest that once covered most of southern New Hampshire.