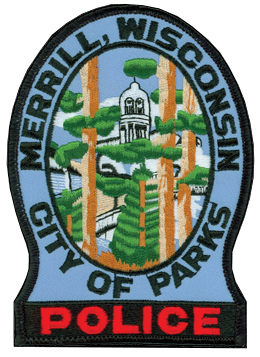 Merrill, Wisconsin, is colloquially known as the City of Parks due to its 15 outdoor recreational areas. The nickname is so synonymous with the city that it proudly is displayed on the service patch of the Merrill Police Department. The vista in the center of the patch depicts the historic Lincoln County Courthouse as seen through the trees when entering the city from the South. The patch’s light-blue background symbolizes the Wisconsin River, along which the city was founded in the mid-19th century.