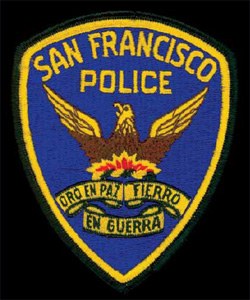 The central emblem on the patch of the San Francisco, California, Police Department depicts a phoenix, a mythological bird. According to ancient mythology, a phoenix’s tears have magical healing powers, and the creature experiences rebirth from its own ashes after death. Like the phoenix, San Francisco rose from the ashes after a devastating fire and earthquake in 1906. In the gold ribbon below the graphic reads the city’s motto, which translates to “Gold in Peace, Iron in War.”