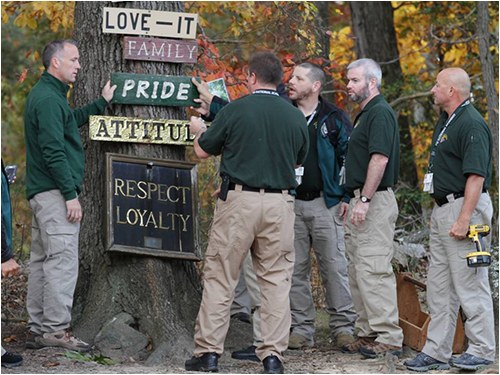 “Managers do things right. Leaders do the right thing.”

A tree sits at the top of a hill at the FBI Academy in Quantico, Virginia, posted with signs, which include “Pride,” “Attitude,” “Respect,” “Loyalty,” “Hurt,” “Agony,” “and “Pain.” These signs were put there by former students, and some have been there for decades. They have inspired thousands of law enforcement officers and agents who struggled up that hill during class runs. The tree has become an icon to thousands of police officers and agents who have attended training at the FBI Academy and the FBI National Academy.

I recently walked past the tree and observed that the “Pride” and “Attitude” signs had fallen to the ground. When my next FBI National Academy class started, I took the students to the tree. I talked to them about how those signs had inspired the people who went before them and how much the signs and tree meant to so many people. The students took the “Pride” and “Attitude” signs and immediately clamored to find the necessary tools, wrote their names on the backs of the signs, and reattached them. When finished, they gave each other a round of applause and then insisted on taking a class photo in front of the tree.

I asked the students what had happened at the tree. After a short period of silence, one student thoughtfully said, “We had an extraordinary moment.” The class heartily agreed. Another student said that they had done the “right thing instead of just doing things right,” and, again, the class concurred. The tree had suddenly changed from “the tree” to “our tree.” An extraordinary act created an extraordinary moment and experience, instilling in the students a strong sense of pride. That pride did not soon wear off as many students made a special effort following their graduation from the Academy to take their families to that tree and take family photos.

Many leaders motivate their employees to perform simply by enforcing rules, regulations, policies, and procedures. While this often is necessary, failure of workers to comply with expectations typically brings about moderate or severe consequences—perhaps, even the loss of a job. These leaders react to an employee’s negative behavior with criticism or punishment, which results in merely adequate performance by the individual. While this is one method of ensuring baseline performance and compliance, it tends to have a short-lived impact and produce counterproductive competition among employees.2 Poorer performance often occurs exactly when the leader needs peak performance—during difficult and challenging times.

According to Maslow’s Hierarchy of Needs, for people to reach self-actualization or their realization of full potential, they first must reach an adequate level of self-esteem and love and belonging.3 I believe they also must possess pride in their work and feel they belong to something important. Pride in their work and in their employer can promote self-esteem, a sense of belonging, and a realization of full potential for many employees.

Pride is a much more effective motivator for peak performance than rule enforcement. The U.S. Marines and large companies have mastered this and brought about extraordinary service, commitment to the organization, and continual innovation from employees. While these results are obvious, organizations and their leaders sometimes overlook this form of motivation for peak performance. Fortunately, the ability to instill pride is teachable, and leaders can do this in many ways.

While it was a simple act to take the students to that tree, the result was a strong sense of pride in those students. When leaders instill pride in their employees, they develop better people and obtain peak performance. This will pay far bigger dividends than just simply forcing compliance with established rules and regulations.

Special Agent Larry Guerin, an instructor in the Leadership and Communication Unit at the FBI Academy, prepared this Leadership Spotlight.