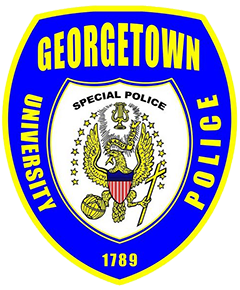 The seal of Georgetown University, located in Washington, D.C., is prominently depicted on the service patch of the campus police department. A vertical, oval-shaped design, the seal features a bald eagle with its wings spread beneath a glowing lyre, grasping a globe with its right talon and a cross with its left. The scroll in the eagle’s mouth bears the words “Utraque Unum,” meaning “both into one.” The seal bears 16 stars, which dates it between 1796, when Tennessee became the 16th state, and 1803, when Ohio was admitted as the 17th state. Georgetown University Police Department officers are commissioned special police vested through the Metropolitan Police Department with full police capabilities on campus property.