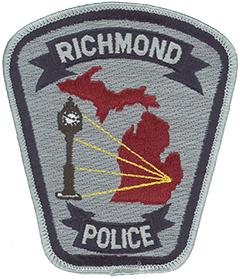 Richmond, Michigan, first was settled in 1835 by members of an English community in New York State who ventured into the Michigan wilderness determined to carve out a prosperous city. The arrival of the Grand Trunk Railway in 1859 secured the community’s success, and in 1878 it merged with two neighboring settlements to form Richmond. In 1924 a successful Detroit merchant born in Richmond paid tribute to his hometown by erecting its now-historic town clock, prominently depicted on the service patch of the Richmond Police Department, along with four emanating rays showing the city’s location on an outline of the state. The clock features Richmond’s motto—“With time for you”—which has become a logo for the city.