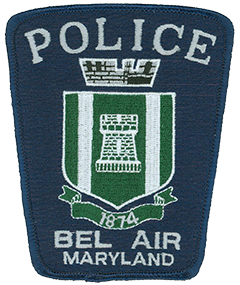 The patch of the Bel Air, Maryland, Police Department prominently features the coat of arms of the town it serves. The crenellated mural crown at the top represents Bel Air’s sovereignty as the county seat of Harford County, while the five merlons symbolize the town’s five-commissioner form of government. The green shield in the center denotes the fertile fields of the county, with the tower in the middle symbolizing the town. The two silver pales on either side of the tower represent Bel Air’s location between the silvery waters of Winters Run to the west and Bynum Run to the east. The banner at the bottom marks the year the town was incorporated and the Bel Air Police Department was founded.