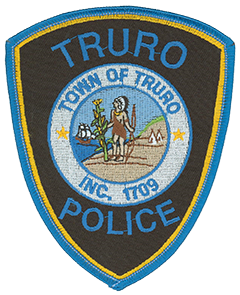 The town of Truro, Massachusetts, was incorporated in 1709 after being settled nine years earlier by British colonists from the nearby town of Eastham. The area was visited in 1620 by the pilgrims from Plymouth colony on their way to establishing a permanent settlement in the New World. This scene is depicted on the Truro town seal, which is featured on the service patch of the Truro Police Department. In the center, a Wampanoag American Indian chief is shown next to a stalk of corn, the food source which ensured the pilgrims’ survival during their first years. A Wampanoag community is represented by two teepees on the right, while the pilgrims’ ship, the Mayflower, is shown on the left at sea.