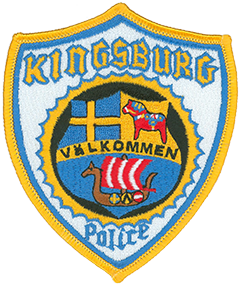 The Kingsburg, California, Police Department patch uses the national colors of Sweden—blue and yellow—to reflect the city’s rich Swedish heritage. Many of the area’s settlers in the early-1870s emigrated from the Swedish province of Dalarna, origin of the Dala horse, a traditional carved and painted wooden horse statue. A Dala horse is depicted on the right side of the shield at the center of the patch—it also serves as the city’s seal. On the left is the flag of Sweden, and directly below is the city’s motto, “Välkommen,” meaning “welcome.” The ship at the bottom of the patch represents the team mascot of Kingsburg High School, the Vikings.