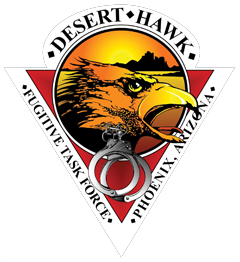 The Desert Hawk Fugitive Task Force was founded in 1992 as a joint effort between the FBI’s Phoenix, Arizona, office and local law enforcement agencies to target violent fugitives and repeat offenders for arrest. The task force currently is staffed by two special agents and members of the Maricopa County Sheriff’s Office, Mesa Police Department, and Scottsdale Police Department. Its diamond-shaped patch features a vigilant eagle over a background of the sun rising above the desert. The bottom of the patch depicts a set of handcuffs, a symbol of the task force’s great success since its inception.