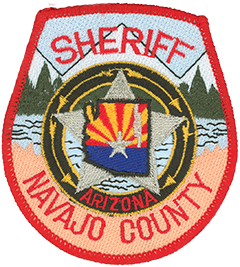 The patch of the Navajo County, Arizona, Sheriff’s Office has a blood red boundary to signify the loss of Deputy Robert Varner, who was shot and killed on December 31, 1988, while attempting to stop a motorist. The black circle around the large silver star at the center of the patch represents the department’s continued mourning for the lost brother. Within the circle are four gold arrows that signify the bond the sheriff’s office has with three American Indian tribes—the Navajo, Hopi, and Apache—to work together for a common cause. The center of the patch shows the flag of Arizona encompassed by an outline of the state; Navajo County is depicted in silver on the right-hand side of the state. The patch’s background depicts a scene of the White Mountains of Arizona above the high desert area of Monument Valley.