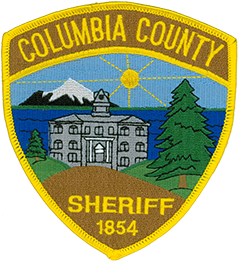 Columbia County, Oregon, was founded in 1854 and is named after the Columbia River, which forms the county’s northern and eastern borders. A scene from St. Helens, the county seat, is featured on the patch of the Columbia County Sheriff’s Department. The center of the patch depicts the county courthouse, which dates back to 1906. The dark-blue background represents the river, and the green horizontal line is the shore of neighboring Washington state, prominently depicting the Mount St. Helens volcano. The sun rises to the east of the courthouse, as shown, and the trees and green and brown areas represent the timber and agricultural resources of the county.