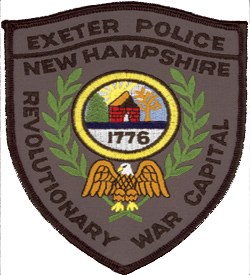 The patch of the Exeter, New Hampshire, Police Department depicts the Exeter Powder House, built in 1771 and used to store gun powder during the Revolutionary War. Exeter served as the “Revolutionary War Capital” of the state, as denoted on the patch. In 1776, the New Hampshire State Constitution was signed in Exeter.