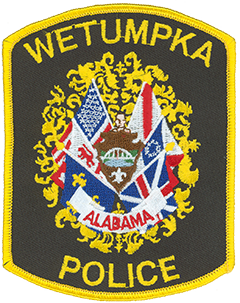 The crest of Wetumpka, Alabama, is displayed on the service patch of the city’s police department. The arrowhead at the center represents the city’s early American Indian heritage, as does the face directly above. The city’s name comes from a Creek Indian word meaning “rumbling waters,” a reference to the nearby rapids in the Coosa River. Within the arrowhead, the river is shown below the historical Bibb Graves Bridge. Also shown is a fleur-de-lis, representing Wetumpka’s French settlement from 1714 to 1763. Surrounding these symbols are the six flags under which the city was historically governed.