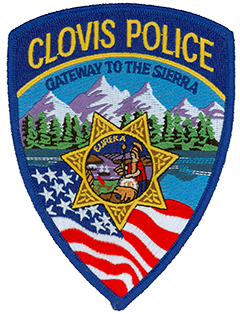 Since its incorporation in 1912, Clovis, California, has been known as the Gateway to the Sierra due to its location at the base of the Sierra Nevada mountain range in central California. The range proudly serves as the backdrop to the Clovis Police Department patch and is depicted above acres of lush forest. Clovis began in 1891 as a freight stop for the railroad and grew to include a lumber mill with a 42-mile-long log flume. The center of the patch depicts the Great Seal of California while a flowing American flag is shown in the foreground.