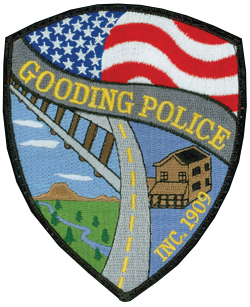 Idaho State Highway 46 runs through the center of the Gooding Police Department patch, as it does the city of Gooding itself. The century-old Gooding Hotel is depicted on the right side of the patch, while the left side depicts the Little Wood River that runs through the city, shadowed by the railroad tracks of the Union Pacific mainline. Above all is the American flag, which stands for the city’s devotion to safeguarding the freedoms of the nation.