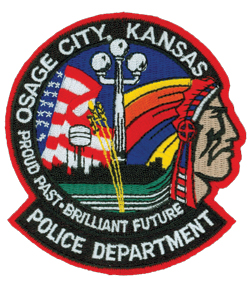 The patch of the Osage City, Kansas, Police Department prominently references the city’s proud past and brilliant future. One of the city’s famous 6th Street light poles is shown in the center, followed below by strands of wheat, a well-known staple in Kansas. The background depicts a flowing American flag symbolizing national pride, as well as the city skyline with its large water tower. To the right is a representation of the Osage Indian, after which the city is named.