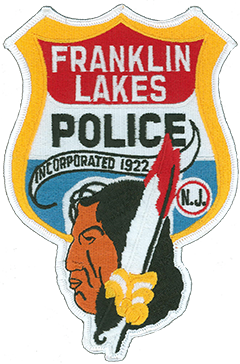 The borough of Franklin Lakes, New Jersey, was incorporated by the New Jersey Legislature in 1922 from portions of Franklin Township, the current township of Wyckoff. The patch of the Franklin Lakes Police Department was designed circa 1960 and has retained its original appearance. The upper portion is modeled after the shape of a traditional police officer’s badge, its red, white, and blue background representing the American flag. The lower portion depicts a member of the Lenni Lenape American Indian tribe, who inhabited the region during its Dutch settlement in the mid-1600s.