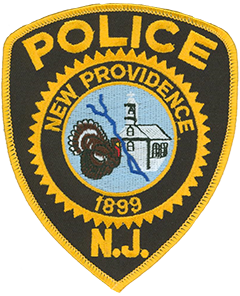 Though New Providence, New Jersey, was incorporated in 1899 its rich early history is depicted on the borough’s police department patch. Settlers first moved to the area in 1720 and named their new home “Turkey” due to the nearby abundance of wild turkeys. Thirty-nine years later when the balcony of the local Presbyterian Church collapsed during a meeting with no serious injuries the community changed the name of the settlement to reflect their perceived Divine Providence. Bisecting the church and the turkey on the patch is Salt Brook, so named when settlers rebelled against new taxes on salt and dumped their supply into the stream that flows through the community.