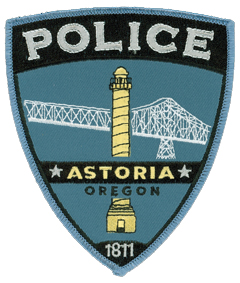 The Astoria, Oregon, Police Department was instituted in 1879 and is one of the oldest law enforcement agencies in the western United States. The patch of its police department prominently depicts the Astoria Column, built in 1920 to commemorate the end of the railroad in the West. The column, which overlooks the city, is modeled after Trajan’s column in Rome. In the background is a section of the Astoria-Megler Bridge.