A little over a year ago, Atlanta, Georgia, Police Department Criminal Intelligence Unit investigator Ty Dennis saw a potential opportunity to open a direct and candid dialogue with the community.

Dennis, an African American male and 15-year veteran of the department, was increasingly disturbed by eroding trust and confidence in police, especially among black men who felt officers labeled and targeted them as criminals. He was particularly alarmed that many young people he encountered were taught to fear, avoid, and even hate the police.

He knew there were misperceptions on both sides—including the implicit or unconscious biases officers and communities have toward each other.

Dennis felt that given the opportunity, he could break through, reach those who distrusted police, and slowly work at earning back their confidence. Still, he knew it would not be easy, especially given concerns regarding possible police corruption, officer-involved shootings, and subsequent negative news media coverage.

All Dennis needed was the right venue. Where, he asked himself, do people do a lot of talking? Not just any talk, but honest, no-holds-barred talk? The local barbershop, of course. 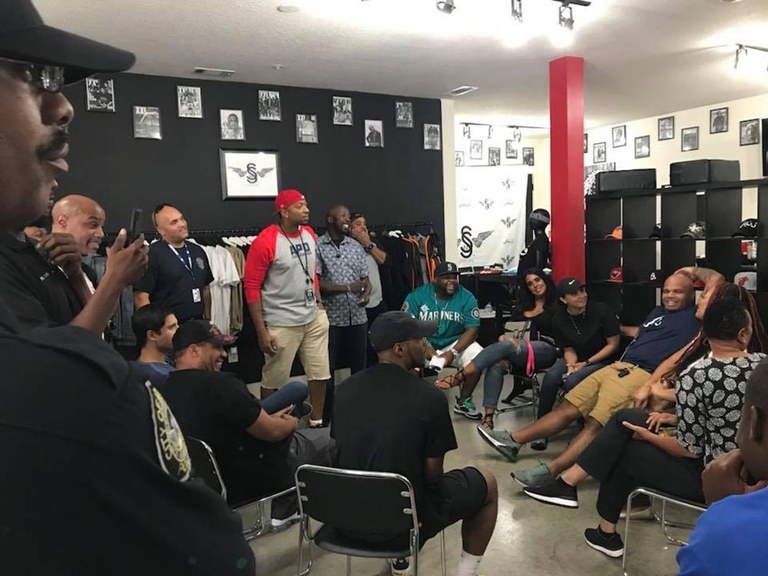 Thus was born Clippers and Cops, a now year-old program that brings police and community members together for candid dialogue about issues that affect both police officers and those who interact with them—in this case, predominantly young black men.

Clippers and Cops takes advantage of the familiar, comfortable setting of a barbershop. The location is conducive to frank discussion, and both sides can openly explain the personal experiences that have led them to develop the fears and preconceptions they carry. Police describe the challenges they face working in an often-hostile climate where all officers are painted with the same broad brush, while community members talk about being targeted unfairly because of their clothes or their hairstyle.

“It’s a relaxed roundtable discussion that gives everyday people a neutral and safe platform for their voices to be heard without judgment,” Dennis said, “and a place to have an open dialogue about the diversity and hot-button issues that have caused so much disparity between these two conflicting worlds.”

Dennis enlisted the help of many of his colleagues from the police department as well as outside resources to develop and maintain the program. A local radio personality has been a vital advocate and partner, acting as a moderator, and the forums also have featured several former gang members.

Since its launch, the program has evolved, sometimes taking place in recreation centers or local restaurants. Women now are welcome and participate in the discussions.

The exchanges can be spirited, sometimes requiring Dennis to play referee, peacemaker, and parliamentarian. They also can be painful and forthright, but Dennis believes they are important and productive. He hopes to spread the forums to other cities.

“Through Clippers and Cops forums, we learn from each other,” Dennis said. “People let down their guards, open up, and become less intimidated. By lifting the curtain and putting our shields of authority aside, Clippers and Cops shows everyday people that all cops aren’t bad people and that at the end of the day we are just trying to do our jobs the best way we know how. The saying is that it takes a village. We’re all part of that village, and most of us want a positive change. This is a start.”

For additional information, Mr. Campos can be reached at cacampos@atlantaga.gov.