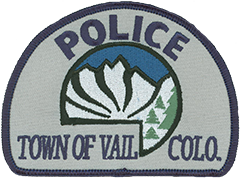 The Vail, Colorado, Police Department patch depicts a pristine view of the nearby Gore Mountain Range. The jagged rows of majestic 13,000-foot peaks meet a crisp blue sky and provide a spectacular backdrop for the town and its renowned ski resort, both named after Vail Mountain. Vail was incorporated in 1966 as the base village to the resort, which today is the second largest single mountain ski resort in the United States and among the highest rated nationwide. Over the years, Vail’s population has soared to more than 5,000 residents. The Vail Police Department has grown with it, consisting of over 30 officers and over 30 support personnel.