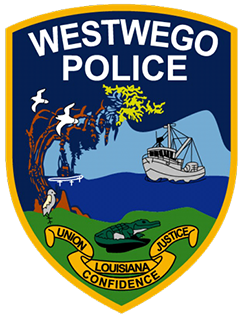 The city of Westwego, Louisiana, is a suburb of New Orleans along the west bank of the Mississippi River. The service patch of the Westwego Police Department depicts a fishing trawler, symbolizing a long history of fishermen in the area earning a living on the bayous among cypress trees and swamp wildlife. Below this scene is Louisiana’s motto, “Union, Justice, and Confidence,” which represents the strong bond between the police department and its community. In the late-19th century, Westwego was the location from which the Texas and Pacific Railway Company, compensated by the state, built a railroad into the West. Folklore holds that as travelers departed the station they heard the conductor yell “west we go,” lending the city its name.