Police Practice: The Anatomy of a Police Pipe Band

The Anatomy of a Police Pipe Band 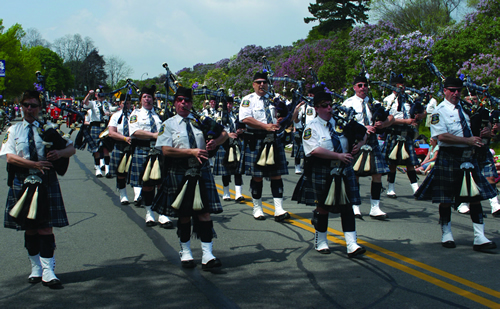 The mournful sounds of the bagpipes led the hearse making its way through the columns of blue uniforms. The young officer had died in a tragic traffic accident while responding to a burglary alarm. Over 2,000 colleagues lined the front of the cathedral sidewalk to greet the casket.

How did bagpipes become the adopted instrument of the law enforcement community? How does a department begin a ceremonial bagpipe unit? The author addresses such questions by sharing firsthand experiences of the Gates Keystone Club Police Pipes and Drums Band, which formed in 1998.1 Celebrating over 10 years of existence, the band has grown to 50 members.

In the late 1800s, many people considered law enforcement and other public service jobs undesirable because of low pay and benefits.2 Many Irish immigrants undertook these professions to establish themselves and become part of America. The Irish police and firefighters brought with them the tradition of playing the bagpipes at parades, ceremonies, and funerals. The New York City Police Department formed the first Police Emerald Society to preserve the Irish heritage in 1953.3 Today, Emerald Societies exist across the country, and many sponsor their own pipe band.

The Gates Police Department, located in upstate New York, has 32 sworn officers. In 1998, six employees committed to starting a police ceremonial pipe band. Prior to that time, no police pipe bands were available in that region. Rather, organizations hired a member of the local Scottish band to pipe comrades to their final resting place—the most intimate part of the funeral service was conducted by a nonlaw enforcement-related person.

One of the first steps members took included developing a mission statement, which helps participants remain focused on the purpose of the band. It defines the significance of the band’s existence and what it intends to accomplish. The Gates Keystone Club’s mission statement reads, “The purpose of the Gates Keystone Club Police Pipes and Drums Band is to provide a prim and proper ceremonial piping unit for funerals of active public safety members who pass away in the greater Rochester area and beyond. We will strive to bring together our brothers and sisters of different agencies in a sense of unity through the playing of traditional bagpipe hymns while at appropriate gatherings.” An effective mission statement should be short, use simple words, and show motivation and commitment. Further, band members should routinely review it to determine whether they are meeting their mission or if their goals have changed. 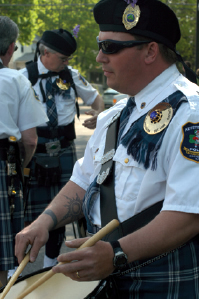 The Gates Keystone Club, started through the police union, administers their finances through the union accountant. Otherwise, a band must become incorporated and register as a nonprofit organization. To generate initial funding, the Gates Keystone Club conducted a press release to announce the band’s formation. Today, it is financially self-supported by marching in local parades and festivals, only growing in size as the revenues increase, and maintains over $100,000 worth of equipment.

Participants must research the cost of needed equipment. A set of bagpipes made of African blackwood costs about $1,200; drums run from $550 for a snare to $700 for a bass; and kilts, doublets, sporrans, belts, and hats require approximately $2,000. Pipers usually purchase their own bagpipes, while the band provides drums and uniforms.

The command presence and appearance of a pipe band proves just as important as the music it plays, and the uniform should represent the police environment. Selecting a tartan for the kilt is among the first decisions to make. Members can choose from hundreds of tartans or create their own. The Keystone Band chose the Earl of St. Andrew tartan with blue checkers and white and black stripes. Blue symbolizes the emergency services, representing peace, loyalty, wisdom, and integrity. For a hat crest, Gates designed its own badge with the band’s name engraved on it. Members wear holsters on their belts, and they created a band patch for summer uniform shirts. For formal ceremonies, participants wear a doublet dress coat with patches on both shoulders and a full-feather bonnet. To maintain the quasi-military appearance, the band incorporated white spats for their black shoes.

Club members realized that many people cannot identify particular pipe bands. Therefore, they created a banner that displays their logo and name during parades, and their bass drum exhibits them as well. The uniform bands select proves vital for showmanship and reputation. Participants should choose quality uniforms and explore what members of other pipe bands wear.

In 1998, none of the Gates Keystone Club founding members had played bagpipes. Thus, they took lessons from an older Scotsman and learned the instrument. A new piper starts on a chanter (approximately $70); learns the nine notes, doublings, and grace notes; and, after 8 or 9 months, graduates to the bagpipes, which most members find easy to play. The instrument has no sharps, flats, or volume control, but students must master the ability to finger, squeeze, and blow at the same time. To recruit prospective participants, the Gates Keystone Club provides free piping and drumming lessons. Members have discovered that individuals who become musicians when they start with the band prove more loyal and apt to stay onboard. 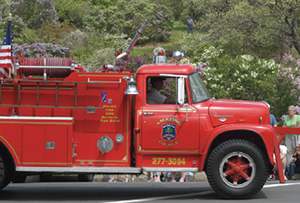 Once the band began making public appearances, the community embraced them—interest in joining the band or having it perform at public events became overwhelming. Although some police pipe bands are open only to active or retired police officers, the Gates Keystone Club began accepting civilian membership and found the community partnership a great asset. The club conducts background checks on new civilian members and holds them to the highest standards. High school and college students, retirees, and professional residents who admire their local police comprise the band. Civilians feel proud to be part of this distinctive group of 30 percent police and fire fighter personnel and 70 percent citizens, and such involvement has proven an enormous building block for community relations. To accommodate families, band members created a color guard unit for the nonmusicians. Additionally, four families have multiple members who have joined the band.

As the Gates Keystone Club band grew in talent and size, it became more than just a police ceremonial band—it averages 50 events each year. Members usually select police-related events, such as promotion ceremonies, law enforcement graduations, memorial services, police-sponsored Special Olympics, and those directly connected with the Town of Gates community. They volunteer to play during local Memorial and Veteran’s Day services and at military funerals related to the conflicts in Iraq and Afghanistan, as well as in local high school musicals. Such events are important to building a relationship with the community. The ability to play bagpipes is a special talent few individuals have and should be shared during appropriate occasions. Community events serve as an excellent opportunity for agency and band publicity and encourage residents to view the officers in a more friendly light.

An effective manager proves vital to a band’s success. The band manager works behind the scenes and in the community promoting the band, finding public venues in which to participate, negotiating paid events for fundraising, and serving as the band’s spokesperson. The manager should know the band’s capabilities, especially when it is just establishing itself. The Gates Keystone Club found that as the community began to learn about the band, the manager’s job became extremely busy and time consuming. The position requires a person who has both the time to devote and the necessary communication skills to handle various situations. Often, as a band grows, in-house personnel conflicts arise, and an effective manager can quickly resolve any problems.

Showmanship is an important piece of the puzzle in a successful band, from playing tunes that the public recognizes, having special marching maneuvers, and engaging the crowd with embellishing swing tenors to having a parade vehicle accompany the band. The Keystone Club purchased a 1966 fire truck for a nominal fee, named it “Amazing Grace” (perhaps the most requested tune on the bagpipes), and discovered the vehicle to be a great crowd pleaser. Further, establishing a Web site and displaying a banner during parades greatly enhances publicity for the band. 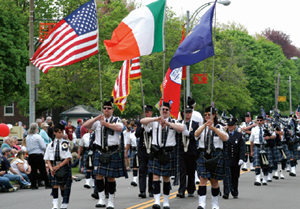 The Gates, New York, Police Department started a ceremonial pipe band, the Gates Keystone Club Police Pipes and Drums Band, over 10 years ago to honor fallen comrades and participate in official ceremonial events. Because the Gates Keystone Club took the time to learn how other departments established a successful band and has remained dedicated to its mission, it has grown to over 50 members. Today, participants include not only police officers but firefighters, high school students, and local citizens as well.

Members report that the experience of playing in a police pipe band has changed them personally and professionally, and they realize it is a talent only a few possess. The Gates Police Department encourages other agencies to investigate the
possibility of establishing a pipe band in their community for the abundant rewards it can bring not only to participants but also to those who hear the thunder of the drums and the sounds of the pipes—a distinctive tone revered by many.