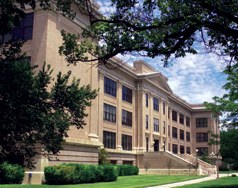 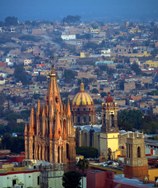 Bringing international visitors to WTAMU presented challenges. The participants needed a visitor’s visa from their government to enter the United States, as well as permission from the Texas A&M University System (TAMUS). With the support and endorsement of the dean of the education department and the WTAMU president, TAMUS granted permission. A TAMUS legal department liability release form was translated into Spanish and signed by each Mexican guest prior to participation in the intense training schedule. 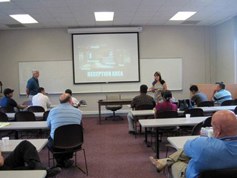 Once the visa and liability issues were resolved, numerous logistical details related to plans for visits and discussions with the local law enforcement community to implement the final training schedule were addressed. Specifically, the professors coordinated activities or scheduled visits with representatives of the Clements Prison Unit; Texas Department of Public Safety; Randall County Sheriff’s Department and District Attorney’s Office; SWAT, gang, and bomb squads of the Amarillo, Texas, Police Department and city Emergency Operations Center; Panhandle Regional Police Training Academy; Texas Court of Appeals; a large Texas facility that maintains the safety and security of the nation’s nuclear weapons; and WTAMU Police Department. A criminal justice professor contacted each agency via letter, then followed up with several phone calls. In addition, the Clements Unit warden, the SWAT commander, and other specialty teams of the Amarillo Police Department assisted in coordinating the various functions in each of these large facilities. A final training schedule resulted from the dedicated efforts of many individuals who made numerous contacts to adjust times, locations, and visits.

The international visitors enjoyed cultural experiences and activities unique to the Panhandle region of Texas. Because the majority of the visitors never had been to the United States, the events reflected the local flavor of the region:

Because this was the first time WTAMU implemented an exchange program of this nature and duration, it received a great deal of media interest. Two of the three local television stations requested interviews in which one criminal justice professor and several Mexican police officers and councilwomen participated. The local Spanish-speaking television station also conducted an extensive interview with the assistant police chief, city council members, and the WTAMU criminal justice professor coordinating the exchange activities. Area newspapers published articles on various segments of the training, as well as numerous pictures of the Mexican guests engaged in classroom training activities.

During the week, debriefings were held to ascertain if the training programs met the expressed needs of the San Miguel de Allende police officers and city council members. The criminal justice faculty sought input directly from participants to gauge their learning comprehension and to answer questions about any of the topics. They demonstrated their learning accomplishments at one of the SWAT training sessions. On the second training day, the Amarillo SWAT team began an all-day session with participants. In the morning, they had the opportunity to shoot a variety of sniper rifles, automatic weapons, and handguns. During the handgun training, the SWAT team directed each person to shoot at a paper target, aiming at the square in the middle. During this timed exercise (one bullet for every 10 seconds), everyone’s shots were clearly outside the square or off the silhouette. The SWAT team immediately noticed that the officers lacked sight picture, trigger squeeze, and proper sight alignment (front and rear sighting). Once these issues were discussed and new strategies were applied and practiced, officers’ scores rose by 100 percent during follow-up timed exercises. Next, the SWAT team moved the participants to exercises that involved shooting metal targets. Again, the officers and officials practiced their sight picture, alignment, and trigger squeeze, successfully hitting over 90 percent of the targets in under 30 seconds. The improvement and understanding by the participants continued numerous times during more training sessions.

The use of a translator was another important factor in the program’s success. The translator was critical in helping the Mexican officers and officials become comfortable in their new environment. The bilingual, nontraditional students previously had participated in the summer study abroad program in San Miguel de Allende. The translator possessed exceptional interpersonal skills and had interacted with many of the police officers and city council officials while she was in San Miguel de Allende. She bonded easily with the officers and officials and made them feel comfortable by explaining the activities for each day, encouraging participants to ask questions on topics they did not understand, and assisting instructors with their questions. At times, the translator and guests were comfortably laughing and joking about the area, Panhandle geography, and other cultural nuances. 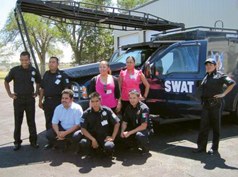 One unintended but critical area of learning resulted during the training: The two city councilwomen learned a great deal about the complexity of the job their officers face every day. The council members also received practical hands-on experience shooting weapons, observing equipment in police vehicles, and learning techniques used to investigate a homicide scene by taking photographs and latent fingerprints and collecting evidence. Both officials commented on how much they learned and how grateful they felt to their officers performing duties in San Miguel de Allende.

The training also highlighted the San Miguel de Allende Police Department’s funding challenges. The economic plight with regard to salary, equipment, training, and preparation for violence was a main topic of conversation during most of the training discussion sessions. Budget concerns are one of the biggest problems facing the San Miguel de Allende Police Department.

Dr. Hueston, a retired police chief, is an associate professor of criminal justice at West Texas A&M University in Canyon.