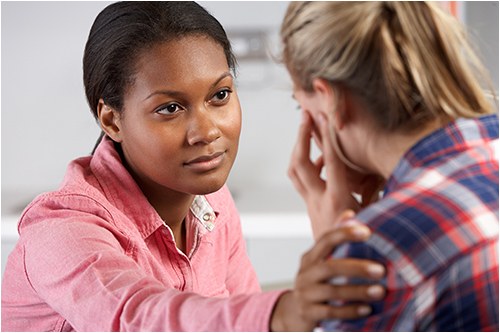 A 17-year-old girl was lured by someone she thought was an older boyfriend. She ran away from home to be with him, becoming isolated and estranged from her middle-class parents. With meager funds and no education or work experience, the girl was told to use her body. Almost immediately, she began dancing at a strip club and having sex for money. Her body was sold on the Internet and in classified ads, at strip clubs and private parties, and on the streets, sometimes as often as 20 times per day. Years of emotional, physical, sexual, and psychological abuse and manipulation replaced her dreams of going to college and becoming a nurse. Over time, she even forgot her name; instead, she bore tattoos of her pimp’s name so she would know that she forever was his property. Control over her emotions, behavior, thoughts, and life disappeared as she was trafficked from one hotel to the next, between cities, and across different states.

As this scenario illustrates, prostitutes often are victims of sex trafficking. Smuggling individuals for sex and forced labor is a worldwide criminal enterprise with an estimated annual revenue of $32 billion—surpassed only by the illegal drug trade.1

Law enforcement agencies usually combat prostitution with traditional vice enforcement focused on the street-level sex trade. Prostitutes frequently are arrested, treated as nuisance offenders by the criminal justice system, and returned to the streets shortly thereafter, propagating an ongoing series of events. While they are criminalized, the true predatory offenders—pimps and traffickers—are empowered to continue manipulating, controlling, and forcing girls into sexual servitude.

Prosecution for pimping often is difficult due to the lack of credibility of prostitutes. Their high-risk, transient lifestyle—occasionally involving narcotics—as well as exposure to a cycle of abuse and violence, renders the best efforts of police departments and prosecutors futile. Traditional law enforcement approaches generate large arrest numbers, but typically are unsuccessful in identifying victims or providing them with the resources necessary to break the cycle of control.

Victims’ testimonies are crucial to law enforcement investigations and successful prosecutions. Building trust and rapport with a traumatized victim is critical. A victim-centered approach provides a systematic focus on the individual’s needs and concerns to ensure compassionate and sensitive delivery of services in a nonjudgmental manner.2

Identifying, not criminalizing, victims is the first step in adopting a victim-centered strategy. To achieve this goal, officers must be committed to helping victims feel safe, secure, and stable. They should use available resources, such as social services and victim assistance programs. Nongovernmental organizations (NGOs) also are valuable during the recovery process. Consistent with a growing trend in current public policy, support and protection of victims should be provided regardless of their active cooperation with an ongoing investigation.3

A victim-centered approach to sex trafficking investigations is useful in breaking the cycle of violence and control. Law enforcement officers can build relationships with potential sources to expose and dismantle sex-trade networks. Investigators should target traffickers and pimps and identify and rescue additional exploited victims who continue to be manipulated.

Undue influence—mind control, thought reform, and psychological power—often is endured by trafficked victims.4 The BITE (Behavior, Information, Thoughts, and Emotions) Model of Human Trafficking centers on this process.5 It focuses extensively on traffickers’ and pimps’ capacity to control victims by undermining their ability to think and act independently.

Traffickers have capitalized on the popularity and accessibility of the Internet to advertise their victims via classified websites. To combat this exploitation, a university computer science lab developed Traffic Jam, a large-scale analytical system designed for law enforcement to provide an accurate, high-level, efficient analysis of online sex ads to identify traffickers and victims.6

After a user enters a phone number into the search field, Traffic Jam explores Internet classified sites to determine where and when that particular number has been used, displays trails of ad movement, and pinpoints interstate tracks to which a victim or number can be linked. The system recognizes that telephone numbers can be switched and applies techniques that enable investigators to spot alternate numbers associated with an individual. Because phones often are swapped, the system also can identify additional victims tied to a particular number. These results provide investigators real-time information regarding potential interstate networks of sex traffickers.

Like many enterprises, escort services require regulated and monitored police department permits to conduct business. However, these services have been suspected as fronts for prostitution rings. Department personnel tasked with issuing permits can work with officers assigned to vice, gangs, narcotics, and organized crime—as well as other local, state, and federal agencies—to prevent prostitution and, thereby, sex trafficking from becoming legitimatized within their jurisdictions.

One permit enforcement team recently conducted an escort sting operation focused on permit violations and prostitution activity. To identify and arrest individuals engaged in pimping, the team took a victim-centered approach to the investigation. Detectives working from a local hotel contacted an in-call escort from an online adult classified ad. When undercover officers encountered a prostitution violation, the escort was taken to a secondary room used for interviewing and booking. The room was staffed by experienced detectives and advocates from a human trafficking NGO.

Prostitutes often are trained on what to say when confronted by police officers, sometimes resorting to a prearranged script. Knowing this, detectives used Traffic Jam during the interview to learn which cities the escort recently had visited, thus, identifying potential prostitution tracks and networks. The investigators applied this information to weaken the escort’s predetermined script and dismantle an alibi. As the woman’s story unraveled, NGO advocates provided intervention techniques to ascertain whether she was a sex trafficking victim and begin breaking the cycle of violence and control. The escort’s resultant confession enabled detectives to capture statements, phone data, and digital photos and identify additional victims.

Two weeks after the interview, the victim contacted law enforcement for help. Her pimp kidnapped her child and forced her to continue prostituting. Previously, she had no one to turn to; however, the victim-centered approach used by police resulted in the woman’s trust. Police mobilized resources, and within hours her pimp, a longtime gang member on probation for pimping, was in jail. The victim and her child were recovered and placed in an emergency shelter. The pimp’s arrest generated leads for additional investigations by the regional human trafficking task force. Two months later, the victim wrote police a letter of appreciation indicating she had returned to her family drug free and escaped the cycle of abuse she endured from her traffickers.

Law enforcement officers can impact the lives of sex trafficking victims by adopting a victim-centered approach in their investigations. By focusing on victims’ needs and concerns and not criminalizing their actions, officers make victims more receptive to the efforts of agencies and NGOs and better prepare them to break from the cycle of abuse, violence, and manipulation. Coupled with this approach, law enforcement organizations should apply available resources and emerging technologies to think outside the box for solutions to sex trafficking networks and rising trends in the sex trade. The results can lead vulnerable, desperate victims toward a road to recovery and rewarding, productive lives.

Detective Alvarez is an adjunct professor of criminal justice at College of the Canyons in Santa Clarita, California. He can be contacted at larryjalvarez@yahoo.com.