Addressing the Problem of the Active Shooter

Addressing the Problem of the Active Shooter

Unfortunately, scenes involving active shooters have become too familiar. Radio transmissions of possible shots fired send the closest police officers to the scene. In today’s world, such calls carry with them the memories of school, business, and theater shootings.

Responding officers must recognize that more than half of mass-shooting incidents—57 percent—still will be underway, with 75 percent requiring law enforcement personnel to confront the perpetrator before the threat ends.1 And, one-third of those officers will be shot as they engage.2

That number disturbs FBI Section Chief (SC) Christopher Combs, Strategic Information and Operations Center, the FBI’s central command post for all major incidents. He also leads a bureau team assigned by the White House to find ways to support state, local, tribal, and campus law enforcement officers who may face an active-shooter situation. The team’s efforts comprise part of a larger initiative, Now Is the Time, begun by the White House after the mass killing of young children at Sandy Hook Elementary School in Newtown, Connecticut.3

First responders face the threat of force as part of their daily jobs. Although tactical teams, such as SWAT, train for barricade situations and multiple-member entries, active-shooter training focuses on five-person-or-less building entries. Responding officers may not previously have trained to face this unique type of threat. According to SC Combs, “We’ve been asked to do our part to help law enforcement better prepare for the next Newtown. With so many officers engaged in shootings, it’s important we do whatever we can to help try to change that and make them safer.”

Special Agent Schweit serves as a special assistant to the executive assistant director of the FBI’s Criminal, Cyber, Response, and Services Branch and is a member of the working group implementing Now Is the Time, a White House initiative to protect communities by reducing gun violence.

Key Considerations of the Active Shooter

Note: Members of the FBI’s BAU-2 and the contributors listed in the box “For Additional Information” provided the basis for these key considerations.

In the aftermath of the tragedy in Sandy Hook, Connecticut, the FBI offered to partner with BJA in the delivery of this crucial training and sent its tactical instructors (TIs) to attend and assess the ALERRT course. The TI program is managed by the Training Division at Quantico, Virginia. As word of training has spread, news of the learning opportunities went national. Since its inception in 2002, ALERRT has trained more than 40,000 law enforcement officers as a result of more than $26 million in funding.

Virtually every state has officers trained through the ALERRT program, and many have made the training mandatory for active-shooter responders, the first among them Mississippi, Alabama, Iowa, Louisiana, and South Carolina. Since the Sandy Hook tragedy, more police departments have requested training.

The FBI’s Behavioral Analysis Unit (BAU) published a monograph on workplace violence in 2002 that examined the preattack warning behaviors of attackers who targeted places of employment. It remains one of the most useful and comprehensive guides for the evaluation of persons of concern in the workplace. The monograph is available at http://www.fbi.gov/stats-services/publications/ workplace-violence.

The BAU started Phase I of the Campus Attacks project in 2007, partnering with the U.S. Department of Education and the U.S. Secret Service. The Campus Attacks project examined attempted and committed homicidal acts of violence (excluding gang or profit motivated crimes) on American college campuses from 1900 to 2008. The project identified 272 such incidents. The BAU currently is working with the U.S. Department of Education on Phase II of this project, focusing exclusively on grievance-based attacks that occurred from 1985 to 2010. This report is planned to be published in 2014, focusing on preattack behaviors of college campus active shooters. The Campus Attacks report from April 2010 is available at http://www.fbi.gov/stats-services/publications/campus-attacks. 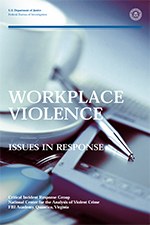 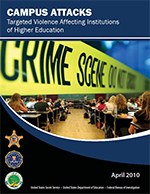 Aware of the increased demand, the FBI agreed to supplement BJA’s effort and integrated ALERRT into the White House initiative, reasoning the training could provide added support for law enforcement officers most at risk—those first on the scene. A private study of 35 active-shooter incidents during 2012 found that 37 percent of the attacks ended in less than 5 minutes, 63 percent in less than 15 minutes.5 Minutes into the Sikh temple shooting in Oak Creek, Wisconsin, the perpetrator turned away from other victims to engage the first officer  on the scene and shot him 15 times. Fortunately, the officer survived.6

To assist in this project, SC Combs and his team turned to the Tactical Instructors (TIs) in the Law Enforcement Training for Safety and Survival (LETSS) program, which was developed in 1992. LETSS, a program of the Practical Applications Unit in the FBI’s Training Division, strives to provide officers with the skills and mind-set required to identify and handle critical situations in high-risk environments.7

LETSS experts recognized the need for coordinated and standardized nationwide active-shooter training and through the FBI/BJA partnership began working directly with ALERRT personnel to study how best to resolve these situations. TIs traveled to the ALERRT center in Texas to observe protocols and ask questions. After working with ALERRT personnel to adjust the course by providing updates and ensuring compliance with current rules and regulations, the FBI adopted the modified course as a national standard.

Since February, 100 FBI TIs have attended the 5-day ALERRT Train-the-Trainer school in San Marcos, Texas. The FBI recognizes that it best serves in a support role as a training partner with BJA. These certified TIs, along with ALERRT instructors, now jointly will be able to provide the 16-hour training at no cost to agencies across the nation. Although funding remains a challenge as federal budget cuts continue, a strong commitment exists to continue to support active-shooter training.

Statistics show that 98 percent of active-shooter incidents involve state and local crimes, primarily occurring in areas with small- and medium-sized law enforcement agencies.8 Ninety-eight percent of these crimes are carried out by a single shooter, usually male (97 percent).9

On January 14, 2013, President Barack Obama signed the Investigative Assistance for Violent Crimes Act of 2012 into law. The act permits the attorney general, upon the request of an appropriate state or local law enforcement officer, to provide assistance in the investigation of 1) violent acts and shootings occurring in a “place of public use” and 2) mass killings—defined as three or more killings in a single incident—and attempted mass killings. Under the act, federal officials assisting the investigation of these incidents are presumed to be acting within the scope of their employment.

The FBI’s efforts include three areas of support. First, before an incident occurs, agencies can obtain no-cost, active-shooter training close to home by submitting a request via the ALERRT website,http://www.alerrt.org. The site provides general information, requirements for hosting a school in a particular area, and registration materials. Department officials also can call the special agent in charge of their local FBI field office for further registration assistance.

Second, experts in the FBI’s Behavioral Analysis Unit (BAU) are available to conduct threat assessments and develop threat mitigation strategies for persons of concern.  BAU is part of the FBI’s Critical Incident Response Group, home to the FBI’s most sophisticated tactical assets. Each FBI field office has a BAU representative to the FBI’s National Center for the Analysis of Violent Crimes (NCAVC). The NCAVC focuses its efforts not on how to respond tactically to an active-shooter situation, but, rather, how to prevent one. These experts can work as part of a team to prevent a situation from escalating by identifying, assessing, and managing the threat.

Third, all FBI field offices are hosting a series of two-day crisis management conferences during 2013 to engage with their state, local, tribal, and campus law enforcement partners and share lessons learned and best practices. The conferences afford attendees an opportunity to share and hear details gleaned from the many after-action reviews the FBI has participated in and observed with involved law enforcement agencies. These provide a plethora of details on how best to deal with unique and complex aspects of these situations, as well as FBI resources available to assist in incident response, management, and resolution.

Conferences are followed by a newly developed four-hour tabletop exercise for law enforcement agencies and other first responders based on facts relating to the recent school shootings. A second tabletop rolling out in May was specifically designed for college campus incidents. These are designed around the latest lessons learned and best management practices, which will include participation by law enforcement, first responders, fire departments, and other emergency/public safety agencies.

Agencies interested in active-shooter training, conferences, tabletop exercises, or threat-analysis assistance should contact their local FBI office. Doing so may help counter the threat posed by the active shooter. These important educational opportunities may help save civilian lives, as well as the first responders who come to their aid.

3 White House, “Now is the Time; the President’s plan to protect our children and our communities by reducing gun violence,” http://www.whitehouse.gov/issues/preventing-gun-violence (accessed April 25, 2013).

4 VALOR is a U.S. attorney general initiative that addresses the increase in assaults and violence against law enforcement. For additional information, see http://www.valorforblue.org/Home.