An Investment in Crime Reduction 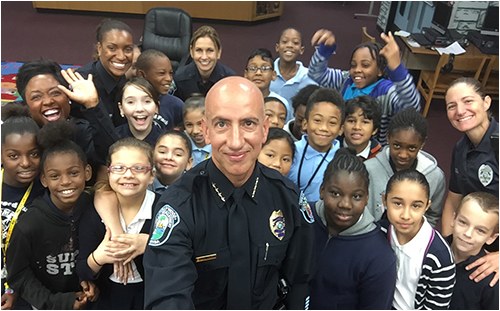 A scrawny kid gets his bike stolen, a cop teaches the angry boy how to box, and the rest is American history. That child was Muhammad Ali, and the officer was Joe Martin, an early civil rights advocate who coached boxing at one of few interracial gyms in the United States in the mid-1950s.1

The Hollywood, Florida, Police Department (HPD) values the development of its community’s youth. The agency recognizes the importance of raising young people to become upstanding, law-abiding citizens. Hollywood serves as home to over 20,000 youth, some of whom live in underprivileged areas and need positive role models.

Officers identified this hardship and began making a difference in many kids’ lives when the department established its Cops Mentoring Kids program during the 2015-2016 academic year. This initiative connects Hollywood police officers who serve as mentors with at-risk students in local schools.

Collaboration proves necessary to resolve community issues. Mentoring provides an avenue to change future generations’ mind-sets. Countering and preventing recruitment efforts by criminal and terrorist organizations should concern everyone. Adolescents trying to find their place in the world become most vulnerable to enticement by these groups. Informing youth, families, communities, and institutions of the realities of false propaganda serves as the best defense against these threats. Building young people’s self-esteem and values provides resilience against criminal predators’ misguidance. 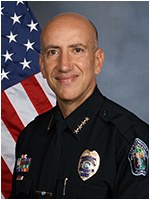 Mentoring is a well-established concept. The man charged with providing wisdom, advice, and guidance to King Odysseus’ son in Homer’s The Odyssey was named Mentor.2 During the Middle Ages, boys served as apprentices to masters of a craft. This helped them gain experience and develop their skills to become journeymen. The mentoring relationship ensured the process and quality of the trade did not diminish. This proverbial “passing the torch” guaranteed the next generation would benefit from previous craftsmanship skills.

Juveniles’ satisfaction doubled when the connection continued beyond a year. Sixty-seven percent of adolescents indicated their structured mentoring relationship proved most helpful if it lasted over a year, versus 33 percent when less than a year, thus confirming that the longer the association continued, the stronger it became.5 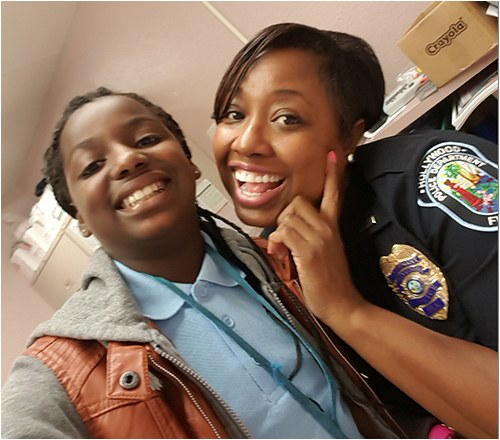 The mentor should function as a friend, not a police officer. Mentors lend emotional support, but explicitly do not change behavior. They help students believe in themselves and raise the young person’s aspirations. A large percentage of at-risk youth lack educational goals.6

Throughout the academic year, officers may communicate with school administrators to monitor their mentee’s progress. During weekly visits, mentors provide positive guidance, demonstrate genuine concern, and help students improve academically, behaviorally, and socially. They discuss the importance of planning for the future, setting goals, and completing tasks judiciously.

The time mentors and mentees spend together provides an excellent opportunity for these young people to experience personal time with someone completely focused on them. The program’s long-term goals center on helping youth make healthy life choices and improving their interactions with police.

Law enforcement supervisors can recruit suitable mentors through specialized units and during roll calls. To encourage participation, agencies can advertise the program’s accomplishments through commendations, newsletters, and local media. Recruitment should be conducted during summer months prior to the start of the school year. The department recruited 40 volunteers to mentor during the 2015-2016 academic year.

Many school districts offer training for mentors; however, the police department can provide specific instruction. HPD’s youth services unit conducts internal education on police roles and expectations. Two supervisors serve as mentor coordinators and address any issues regarding the program. Agencies should remain flexible and support volunteers by allowing time for mentoring during duty hours.

HPD asked every public elementary school to identify at-risk students who could benefit from the program. The schools selected troublesome young people who needed attention and struggled most due to problems, ranging from poor parenting to homelessness. At-risk youth appear less likely to have mentors, but more likely to want them.7

Tracking mentoring activity can prove challenging. In addition to self-reporting, mentors and mentees can complete surveys regarding the program and recommend changes. Program supervisors may provide visitation logs at schools. Computer aided dispatch (CAD) will track visits through signals on an officer’s radio.

Mentors also participate in off-duty activities, such as movies, birthday parties, theme parks, and picnics. Additionally, officers engage mentees in events they are passionate about, such as sporting events. One HPD mentor took a student to a local hockey game where the young person shared the excitement of the sport in addition to being acknowledged on the jumbo screen. Mentoring takes all forms and contains unlimited possibilities.

In 2016 HPD officers responded to a domestic incident involving a barricaded suspect who had taken the oldest daughter hostage. After hours of negotiations, the individual released the child and then committed suicide. An officer already was mentoring the youngest son. This young person needs the individual attention of the mentor now even more.

One mentee’s family included 14 brothers and sisters. Their father passed away. The HPD officer who began mentoring the student noticed a change within two months. The teacher stated that this youth’s grades and attitude improved.

For Halloween a mentor helped one young person by working with department volunteers to make a robot costume for the child. Another HPD officer fulfilled a mentee’s Christmas wish by raising funds through social media for a special gift.

HPD officers provided food for Thanksgiving to mentees’ struggling families. One mentor hosted a Thanksgiving meal for the mother and two siblings of a mentee. “The more we are involved, the less contentious the relationship stays between the community and the police. We want to step in and get to know each other on a positive level,” the mentor stated.8

A police officer’s typical day consists of meeting people at their worst, whether taking victim reports or enforcing the law. Individuals who mentor report positive experiences and a sense of satisfaction. Many officers indicate that mentoring comprises the best part of their week. Most mentors look forward to it with anticipation.

Mentoring proves to be a beneficial experience that allows officers some control over their day and counterbalances the negativity. Focusing on adverse thoughts appears to slow down the brain, drain its ability to function, and create depression. However, an optimistic, joyful outlook supports mental growth and helps the mind perform at peak capacity. People can effectively train their brains to be positive.9 The mentoring program provides a sanguine psychological effect, which benefits the young person, community, department, and officer.

It appears true that one of the best things people can do is to give, rather than receive. The National Institutes of Health found that when people contribute, they activate regions of their brain associated with pleasure, social connection, and trust.10 Altruistic behavior releases endorphins that produce positive feelings known as “helper’s high.”11 Giving may reduce tension, which causes numerous health issues. Stress reduction improves physical health and longevity.12

In August 2015 HPD hosted a breakfast meeting for area school principals, the superintendent, and board members. At this meeting, attendees discussed the priorities of HPD’s youth services program, the role of school resource officers (SROs), and the purpose of mentors. The department renewed its partnership with the county school board and its mentoring program. Support from the superintendent encouraged the investment and cooperation needed from the principals.

When HPD’s mentoring program started, concerned parents and neighbors contacted the school and inquired about police activity near the building. Police mentors provide a benefit with the presence of uniformed officers and marked vehicles. An increase in adult authority figures, such as police officers, contributes to school safety.

On occasion, mentors diffused disruptive situations while on campus. In addition, the mentoring program improves relationships between officers in different sections of the department. When members from various units work together, they significantly impact crime.

In February 2016 the Broward County School Board held its 2016 Community Involvement Awards. The committee considered several factors when making its selections. The passion and commitment of HPD’s mentors earned them the Mentorship Program of the Year Award. The school board also presented them with the School-Based Partnership of the Year Award.

One elementary school assistant principal indicated that the time officers give impacts students in positive ways. The children gain a sense of importance. These young people feel proud that someone, especially a police officer, visits their school to recognize and spend time with them. Not all children experience healthy relationships or strong role models in their lives.

Mentoring improves young people’s behavior and schoolwork. Youth often survive challenging life situations, including stressful changes at home or transitions to adulthood, with the help of mentors. The Hollywood Police Department anticipates that the investment in today’s youth through mentoring, prevention, and intervention programs will result in crime reduction benefits in the future.

The program serves as a preventive measure to deter recruitment into criminal organizations, such as gangs or radicalized violent extremist groups. This platform functions as HPD’s investment in crime reduction for its community. Mentoring strengthens relationships between police and at-risk youth. Everyone benefits through Cops Mentoring Kids.

For additional information the author may be contacted at tsanchez@hollywoodfl.org.