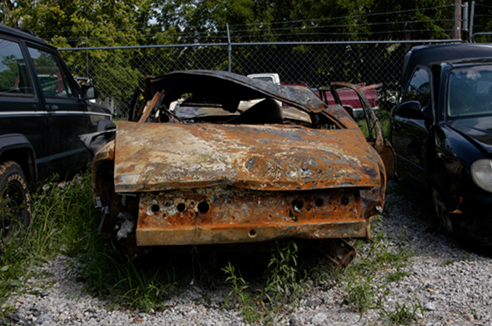 The FBI Laboratory uses various processes and resources to conduct forensic paint examinations. A recent case demonstrates how the laboratory used these analyses to source automotive paint that transferred during the commission of a hate crime, what information investigators presented at trial, and how law enforcement agencies submitted direct requests to the FBI Laboratory.

In April 2011 a federal grand jury in the western district of Arkansas indicted two men on charges that they committed a racially motivated assault on five Hispanic males. Local law enforcement charged the defendants, aged 19 and 20, with five counts of perpetrating hate crimes and one count of conspiring to do so in violation of the Matthew Shepard and James Byrd, Jr., Hate Crimes Prevention Act, enacted in October 2009.1 The charges resulted from a May 2010 confrontation in which the defendants’ racial taunting escalated into a vehicular assault as the five victims in a 1995 Buick LeSabre left a gas station/convenience store. The defendants, driving a Ford F-250 pickup truck, pursued the green-colored sedan while reportedly hurling racial slurs and repeatedly ramming their truck into the back of the vehicle. The LeSabre’s teenage driver lost control of the vehicle, which then rolled, hit a tree, and, ultimately, burst into flames. All five victims survived, with most sustaining life-threatening injuries. Officers recovered the truck less than one-quarter of a mile from the scene where it had run out of gas, thus, enabling evidence collection by local law enforcement officers to occur simultaneously with the crime scene investigation.

The initial investigation resulted in local law enforcement asking the FBI Laboratory’s Chemistry Unit to examine green smears on the front tow hooks and bumper of the truck to determine whether they could have come from the sedan. The fire complicated the analysis by destroying all of the paint on the back end of the LeSabre where contact between the two vehicles would have occurred. Therefore, it became necessary to work with the transfer on the truck to determine if it could have originated from a LeSabre of the model-year range represented by the victim’s vehicle.

To conduct this type of analysis, the Chemistry Unit accessed multiple resources used to source automotive paint transfer, including vehicle assembly and paint manufacturing contacts, automotive paint databases, and auto body repair shops’ color refinish books. Combining these tools made it possible to determine if the green paint on the truck bumper could have transferred from a 1995 Buick LeSabre.2

The forensic paint examiner presented the results at the trial and described how these resources and the sedan’s vehicle identification number (VIN) enabled FBI Laboratory personnel to compile their report. The findings indicated that the victim’s vehicle originally was the same general shade of green as the transfer on the truck bumper, the 1995 model was among the vehicles featuring this type of paint, and in 1995 General Motors (GM) produced 6,000 green Buick LeSabres. A subsequent search of Arkansas Department of Motor Vehicle (DMV) records estimated that there were 25 of those green sedans registered in the state at the time of the incident. The examiner presented the inherent limitations of the results; however, none of these factors provided cause to dismiss the victim’s vehicle as the source of the transfer. Ultimately, the federal court convicted the defendants of committing hate crimes against the victims.

Dr. Wright specializes in paints and tapes analysis in the Chemistry Unit of the FBI’s Laboratory Division in Quantico, Virginia.

As outlined in the FBI Laboratory’s Handbook of Forensic Services, investigators used a straightedge razor blade to collect green paint scrapings from the front bumper of the defendant’s truck.3 The fire had destroyed any suitable paint available from the victim’s vehicle, thus preventing submission of a sample for comparison. Examination in the laboratory revealed that the paint scrapings from the truck’s bumper and tow hook contained only a partial-layer structure consisting of a clear coat over a dark-green/emerald-colored base coat. A typical automotive paint-layer system contains a topcoat of clear and base color layers in addition to one or two primer layers between the base coat and sheet metal. Laboratory examinations determined that both of the transferred paint layers were from the original equipment manufacturer (OEM) and could be sourced back to potential vehicle types based on chemical composition and base-coat color.

Because no paint of value was recovered from the victim’s vehicle, information reported to investigators did not focus on the LeSabre. Instead, it helped determine whether that type of vehicle (e.g., make, model, model year) could have paint consistent with that recovered from the defendants’ truck bumper.

Due to the damage on the sedan, there was no way to retrieve the original color code or the VIN. However, a traffic citation filed several months prior to the crash noted the VIN and the vehicle color, illegibly recorded as either “gry” (gray) or “grn” (green). Using the VIN from this citation, the FBI Laboratory obtained a vehicle history report for the LeSabre.4 The statement indicated that the vehicle had four owners over the course of its history. The first and third reported severe damage events, implying that refinish work likely resulted. Neither the areas where damage occurred nor the extent of the repairs were specified in these reports. Only the fourth owner noted the vehicle color as green. Based on the repair history prior to the fourth person’s registration of the vehicle, the question of the original color finish remained.

To identify the original vehicle color, an Internet search to correlate color codes to VINs indicated that a local dealership had this information.5 The first eight digits of the victim’s VIN were provided to a Buick dealership located outside of Washington, D.C. The dealership identified the original color as dark-yellow green metallic. This information confirmed that the LeSabre had the OEM green finish. However, because the paint transfer was a smear, rather than a chip, it was not possible to conduct a direct color comparison to the paint color standard. Cross-referencing the code for this color with two independent automotive paint-refinisher pages for GM confirmed that this color was available on Buicks during model years 1994 to 1997, as well as on Chevrolet, Oldsmobile, and Pontiac.6 An Internet search and a GM contact provided some background information on the vehicle’s production history. The Buick City assembly plant in Flint, Michigan, produced the LeSabre, the Buick Park Avenue, and the Oldsmobile 88.7

Using an automotive paint database available only to law enforcement, the lab compared the chemical composition of the transferred paint from the truck’s bumper to the clear-topcoat and base-coat layers for vehicles produced at the same plant during model years 1994 to 1995. The chemical composition of the transferred clear-coat layer compared favorably with some of the database samples for model year 1995, while other samples for that year differed.

GM also supplied contact information for the paint manufacturer used at the Buick City plant during this period. The automaker and paint manufacturer independently advised that the clear topcoat for GM’s model year 1995 products from the Buick City assembly plant began with a specific paint-chemistry composition. Conversion to a different formulation subsequently occurred between March and June 1995.8 This information corroborated the findings from the comparison of the chemical composition of the transferred paint to the database samples. Although the same color code was available at the plant for model years 1994 to 1997, the chemical composition of the transferred clear topcoat was comparable only to the database for model years 1994 and 1995. One of the 1995 database samples had the same color as the victim’s Buick LeSabre. The chemical composition of this sample and the transfer paint from the truck bumper coincided.

The FBI Laboratory’s GM contact also confirmed use of the paint’s chemical composition and color code on the Park Avenue and Oldsmobile 88 produced at Buick City.9 This information was necessary to provide context to the findings presented at trial—the possibility that the victim’s LeSabre or another vehicle painted at the same plant with the same chemical composition could have been the source of the transfer to the suspect’s bumper.

At the trial the examiner presented testimony regarding the automotive paint searches. Statements included the caveat that during the same timeframe, the Buick City plant painted Buick Park Avenues and Oldsmobile 88s using the same color code.

The passenger of the truck pled guilty to committing a federal hate crime and conspiracy. In exchange for his testimony against the driver, he received a sentence of 4 years in federal prison. Four of the victims also testified at the driver’s trial. The court convicted the truck’s driver of five counts of perpetrating a hate crime and one count of conspiracy and sentenced him to federal prison for 11 years.10

This article highlights the capabilities and resources of the FBI Laboratory’s Chemistry Unit to assist local and state law enforcement agencies with make-model-year investigative lead information in hit-and-run cases. If local or state laboratories have the capability to conduct paint examinations or comparisons but do not have sourcing resources available, the FBI Laboratory will accept cases for automotive paint sourcing.

Questions about paint analyses should be directed to the FBI Laboratory, Chemistry Unit at 703-632-8441.

1 After more than a decade of advocacy by the Human Rights Campaign, the Matthew Shepard and James Byrd, Jr., Hate Crimes Prevention Act (HCPA), Public Law No. 111-84 was signed into law by President Barack Obama on October 28, 2009.

2 The technical aspects of the examination were described in greater depth in the Canadian Forensic Science Society Journal 45, No. 2 (2012): 79-88.

7 E-mails received from technical contact at General Motors Corporation, May 2011.

9 E-mails received from technical contact at General Motors Corporation, May 2011.