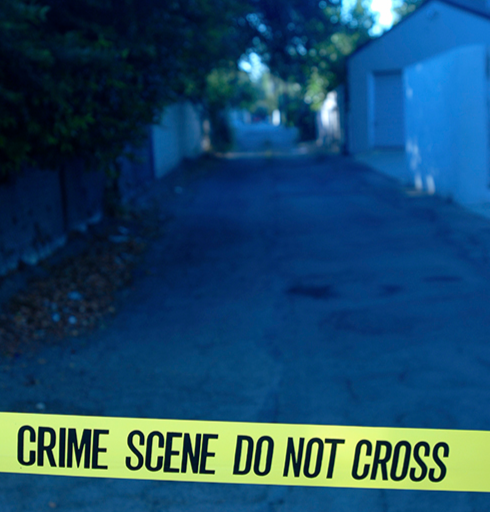 On October 17, 1978 the Omaha, Nebraska, Police Department responded to a crime scene where a man had been brutally assaulted and stabbed to death in his home. He later would be identified as 61-year-old Carroll Bonnet, an employee at the local hospital.

Law enforcement officers investigating the case collected a variety of evidence, including latent fingerprints and palm prints lifted from the victim’s bathroom. They believed the suspect left behind the biometric evidence while attempting to clean blood and other identifying material before leaving the residence in the victim’s car. Of particular interest was a note left by the suspect that read, “I am leaving this crime with one clue. Find it yourself. Die, pig.” The Cicero, Illinois, Police Department recovered the stolen vehicle days later without incident and obtained additional latent print evidence for further analysis.

The Omaha Police Department processed all of the evidence from the crime scene but was unsuccessful in matching the latent prints against the known fingerprint repository. In an effort to identify a suspect, the department forwarded a teletype to various law enforcement agencies, requesting additional support in searching the prints against other available biometric repositories. Unfortunately, the suspect remained at large and, with no new leads, the case went cold for the next 30 years.

In December 2008 the Omaha Police Department’s Cold Case Unit received a fax from the Criminal Laboratory Services Section of the Florida Department of Law Enforcement (FDLE) inquiring whether the Bonnet Case latent print evidence had been searched and linked to a suspect. Realizing the case was unsolved, the Cold Case Unit contacted its department’s crime laboratory to request that the prints be searched again with new, automated biometric technology that was unavailable in 1978.

The Omaha Police Crime Laboratory searched the latent prints against the FBI’s Integrated Automated Fingerprint Identification System (IAFIS). In less than 5 hours, the IAFIS responded with a list of possible candidates for comparison purposes. Several days were devoted to examining the latent print evidence against the IAFIS results, which led to the positive identification of the first suspect—Jerry Watson. Investigators located Watson at the Lawrence Correctional Center in Illinois, where he was serving time for prior burglary charges.

The Bonnet Case officially was reopened based on this new evidence and assigned to a Cold Case Unit detective who coordinated with the Omaha Police Crime Laboratory and the Nebraska State Patrol to further analyze the original evidence. A Thrifty Nickel advertisement was found among the evidence with the name “Jerry W.” scribbled on one of its pages. The detective believed this to be the name of the suspect, Jerry Watson, as the clue referenced in the note left at the crime scene.

After researching Watson’s background, it was discovered that he lived only a few blocks from where the victim’s stolen vehicle was recovered. Because of the biometric evidence, investigators obtained a warrant just days before he was to be released from prison. Watson was interviewed and presented with an order to obtain his DNA. During the interview, he denied any involvement in the murder, knowledge of the deceased, or presence in the victim’s apartment. The latent fingerprints ultimately led to the positive identification of a suspect; however, the results of the DNA test further substantiated his responsibility for the homicide.

In August 2011 Watson faced a jury for the murder of Carroll Bonnet. After 10 days of testimony, a guilty verdict of first degree murder was returned. On October 17, 2011, 33 years to the day since Bonnet’s body was discovered, Jerry Watson was sentenced to life in prison.

“The Omaha Police Department processed all of the evidence from the crime scene, but was unsuccessful in matching the latent prints against their manual fingerprint repository.”

The Latent and Forensic Support Unit Chief, Joey L. Hixenbaugh, presented the 2012 Latent “Hit of the Year” (LHOY) Award at the Omaha Police Department in Omaha, Nebraska, on August 24, 2012. The award was presented to Senior Crime Laboratory Technician Laura Casey and Detective Douglas Herout for their efforts in solving the 33-year-old homicide of Carroll Bonnet. The case went unsolved until 2008, when latent fingerprint images collected from the original crime scene were searched against the Integrated Automated Fingerprint Identification System (IAFIS).

One success story is selected annually as the LHOY and is promoted throughout various law enforcement publications and media. In addition, the FBI works closely with those responsible for solving these cases to reenact the identification, apprehension, and conviction of the suspect(s) through the production of the LHOY video. The video is shared throughout the law enforcement community as well as the general public. To nominate a story for the next Latent “Hit of the Year,” please contact us at fbilatenthit@leo.gov.

To view the LHOY Video Series, visit the FBI’s Internet site at www.fbi.gov/about-us/cjis/fingerprints_biometrics/iafis/iafis_latent_hit_of_the_year.