Focus on Social Media: Communication as a Function of Leadership

Communication as a Function of Leadership

In the middle of the night in Houston, Texas, floodwaters overtook houses and all the comforts inside that made them homes. Rooftops served as the only retreats. There was no electricity, and smartphones offered the sole means of contacting rescue personnel. The 911 communications center became overwhelmed with calls for help, but victims had another way to connect—Twitter. Thousands took to the social media platform during and after Hurricane Harvey to seek assistance from law enforcement. In many cases, their actions proved lifesaving.

As Hurricane Harvey grew into a historic, catastrophic storm, Chief Art Acevedo of the Houston Police Department (HPD) already had communicated consistently with his Twitter followers. Early on, while chief of the Austin, Texas, Police Department, he embraced the use of Twitter and brought those skills with him to his position in Houston.

Two days prior to Harvey hitting the Texas coast as a hurricane, he tweeted, “Severe weather is expected this weekend. Please prepare now and plan ahead. @houstonpolice will be ready to respond and protect our community.”

Chief Acevedo, along with other employees who managed HPD’s Twitter feed, strategically employed this social media platform early and often during the storm and its devastating aftermath. From retweeting weather updates and public safety messages to sharing personal reflections, Chief Acevedo used Twitter to provide reassurance in crisis. In the first 7 days after the hurricane made landfall, he tweeted or retweeted on 180 different occasions. Using 140 characters at a time, he acted as commander, comforter, and cheerleader.

When thousands of victims spent the night on the roof of their home to escape the pursuing floodwaters, they could not watch updates on newscasts. Twitter provided something visible; the exquisite word choices gave them something to hold onto. The portability of the platform was vital. Victims with smartphones had near-constant contact with rescue workers, be they sworn officials or citizen heroes desiring to help. Chief Acevedo communicated with those in need to keep them calm, focused, and positive with spirited “can do” messages. Many of his tweets centered on the outstanding work of his department’s officers and partners. He instilled pride inside and outside of his agency to fuel the energy and spirit required to face such an epic challenge.

“As Hurricane Harvey grew into a historic, catastrophic storm, Chief Art Acevedo of the Houston Police Department already had communicated consistently with his Twitter followers.”

Throughout Hurricane Harvey, HPD’s assistant chief of emergency operations, Larry Satterwhite, described Twitter as a critical component in internal communications. Because Chief Acevedo’s tweets praised his officers and their response, they fed the department’s resolve in enduring endless days without breaks during the rescue efforts. Mr. Satterwhite stated, “Our people never complained. They just kept going.”

HPD did not regard communications as an afterthought amid all the chaos. Rather, this effort comprised an integral part of storm preparations. Certainly, many tasks lay ahead, such as securing property, acquiring adequate help, obtaining necessary resources, and responding to the thousands of calls for service. Regardless of the significant challenges, the commitment to use Twitter as a force multiplier during this catastrophe happened in sync with every other possible public safety response.

The Harris County, Texas, Sheriff’s Office (HCSO) shared the same orientation to connect with its residents via Twitter. Sheriff Ed Gonzalez received messages on both his and HCSO’s Twitter feed regarding citizens in desperate circumstances. For example, in the early morning hours, a few days after landfall, he reached out to his Twitter followers about a pregnant woman going into labor. While HCSO personnel were involved in multiple rescue efforts, other Twitter followers saw the sheriff’s message, shared it, located the woman, and transported her to a hospital within an hour. Undoubtedly occupied with many other issues, Sheriff Gonzalez still managed to send a follow-up tweet reporting a successful resolution.

The social media outreach extended beyond the use of Twitter. Using the free live-streaming app Periscope, Sheriff Gonzalez and Chief Acevedo individually took a page from the media’s playbook by broadcasting “live shots” for their social media followers. While patrolling the submerged streets and neighborhoods from a rescue vehicle or boat or even wading through floodwaters, both law enforcement leaders narrated the disaster with a hopeful tone of response and resolve. Through the use of their smartphones, they could direct the emotions and behaviors of the growing number of followers. 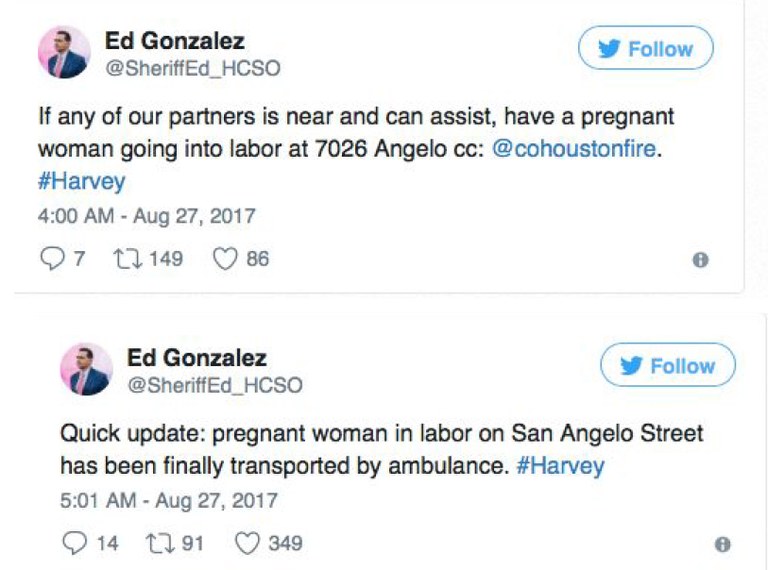 “Always in uniform, both Sheriff Gonzalez and Chief Acevedo continued their commitment to thoughtful, purposeful communication.”

This level of communication did not abate with the water level. Always in uniform, both Sheriff Gonzalez and Chief Acevedo continued their commitment to thoughtful, purposeful communication. During the Periscope live broadcasts, viewers could make comments. While broadcasting 1 week after the hurricane hit, Chief Acevedo showcased officers from departments all over the United States who arrived in Houston to provide relief and security for the nation’s fourth-largest city. Amid the profusive gratitude, Chief Acevedo stated, “These friends, these heroes are here to make sure no one loots. There will not be looting in our city.” As a result of using social media to build and sustain civic pride, both HCSO and HPD reported few incidents of looting.

The viewers on Chief Acevedo’s Periscope site weighed in with overwhelming support, including appreciation for his commitment to communicate. One follower posted, “Chief, you’ve raised the bar very high.”

It was not just the use of the technology that made this level of engagement so remarkable—it was the user, the resonant voice behind the tweets, and the leadership of the sheriff and chief. They successfully connected with those who needed to hear from someone in charge during a time when their lives depended on it. 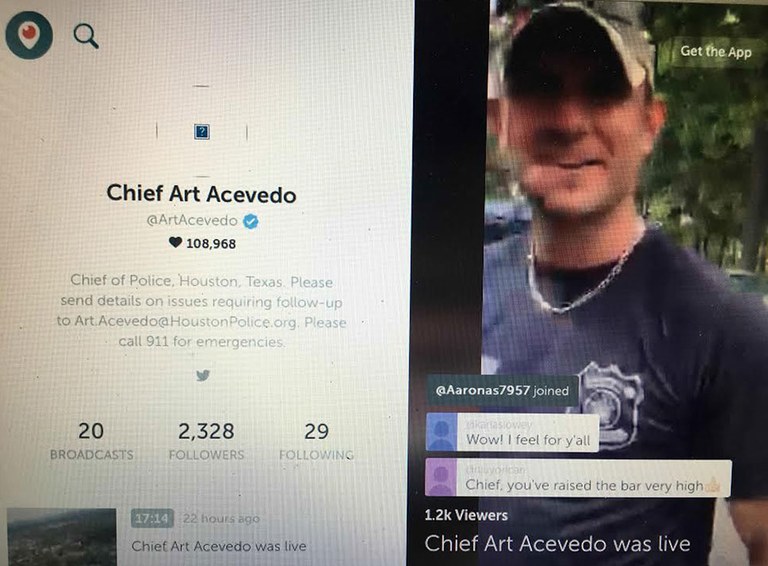 Ms. Pennybacker is an instructor in the Executive Programs Instruction Unit at the FBI Academy in Quantico, Virginia, and can be reached at glpennybacker@fbi.gov.