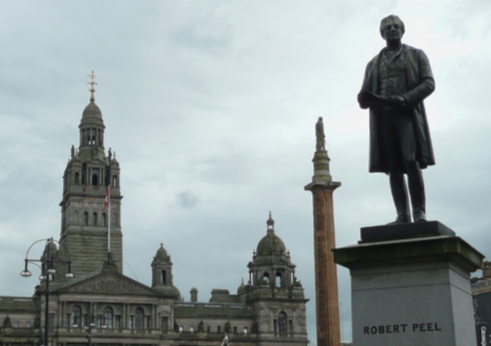 Robert Peel, known as the father of modern community policing, graduated first in his class at Oxford in 1808 with degrees in mathematics, physics, and classic literature. Peel delivered a widely acclaimed speech in January 1810 and began a career of social, economic, and legal reform that lasted 40 years. He served as Britain’s chief home secretary from 1812 to 1818 and built a reputation for having a firm but compassionate personality. Peel helped establish a native Irish police force to calm conflicts that arose in Ireland after its 1801 unification with England.

British evangelicals long had protested Britain’s legal and penal system; its law enforcement strategy involved tactics that some citizens found intimidating. Law-abiding individuals who wanted to prevent crime formed disorganized groups with members serving as watchmen. Much to their liking, Peel was sympathetic to these evangelicals.

Peel achieved sweeping penal reform and went on to establish the Metropolitan Police Act (MPA) of 1829, which was instrumental in creating Britain’s Metropolitan Police Force. In addition to the MPA, Peel wrote what became known as the Nine Peelian Principles of Law Enforcement. These principles essentially held that the police are the people, the people are the police, and crime prevention is possible without heavy intrusion into citizens’ lives.

Specific concepts, such as issuing badge numbers to ensure officer accountability and referring to qualitative encounters with citizens, instead of counting the number of arrests, were concepts that came out of Peel’s community policing model. British officers instructed in the nine principles were deployed into urban areas and were referred to by the locals as Peelers or Bobbies, a name still used today.

Police departments in America hold that community policing aims to promote partnerships between communities and local police and to encourage cooperation between residents to address and solve problems in the community. Many American police departments champion the same tenets that originated with Peel.

Over the years, law enforcement organizations have had to evolve. Sophisticated organized crime, gang violence, civil unrest, mass demonstrations, and terrorism represent just a few of the challenges faced by law enforcement today. Peel certainly could not have envisioned these challenges when he conceived his nine principles.

Mr. Lewis worked as a patrol officer and supervisor for six years in Oregon and currently is a consultant on police department policies.

Hence, the question arises as to whether the Peelian principles that are the hallmark of modern community policing remain relevant today. What challenges does a current day Peeler face? March 2011 afforded an opportunity to find out the answer to this question and more. On a cold and overcast day, the author arrived in London to interview a sergeant of the Westminster Metropolitan Police at Belgravia Station.

Prior to his passing through the gates of the Hendon Police College, the sergeant, a London police officer for over 25 years, worked abroad as a chemist. Today, his world is a 3-mile stretch of London that encompasses the area between Albert Hall and Knights Bridge and has a unique mix of residential homes and tourist attractions.

Sitting in a busy conference room, the sergeant mused on Peel’s influence. He maintained that “The Peelian principles remain the basic threshold of the police service.” He explained, “over the years…commissioners have put different reflections on the Peelian principles, but they all have revolved around the concepts of community service, keeping the community safe, serving the people, taking pride in what we do, and maintaining professionalism in our actions.”1

According to the sergeant, while Peel’s principles generally guide officers, the culture of the department has changed. “It used to be that the more senior officers were beat cops. They were the elder statesmen; those officers with 15 or 20 years experience were the ones making the rounds. They maintained contact, particularly, with the elderly and checked in on them to reinforce the message that they were a presence in the community. The newer officers were the radio chasers,” he explained. He added that within the last 5 years, that approach has been augmented.

The sergeant stated that several years ago, groups of officers formed into units called Safer Neighborhoods teams. These teams of officers each are given a section, or ward, of Westminster for which they are responsible.

The sergeant explained, “there might be a call about a public house (pub) with drunks causing a disturbance or a group of people fighting. All available officers in the area will respond and take appropriate action. A day or so later, the Safer Neighborhoods team will arrive to do its part.” As it turns out, its part is intelligence. After such a disturbance, the team will contact the landlord of the establishment to gather information on the operators of the property to determine if underage drinkers are being served or if licensing legislation is being abused. The team’s goal is to gather as much information as possible to establish a larger picture of the neighborhood and its residents.

Every 3 to 4 months the teams convene ward panels, groups comprised of officers who work together with the citizens who live and work in their ward. At these meetings, local community members voice their concerns, perceptions, and needs. During ward panel meetings, a problem solving team gives a presentation on what the officers in the ward have done since the last meeting. Together, officers and citizens discuss and determine what the ward priorities will be over the next 3 to 4 months. This popular concept relates to the Peelian principle that the police are the people and the people are the police.

In recent months, the ward panel has identified residential burglaries, pickpocketing, and thefts from motor vehicles as the foremost priorities in the ward. This is community policing in its purest and most effective form. It is important to note that panel meetings are not just officers giving statistics about crime but a dedicated group of community stakeholders, property owners, and venue proprietors providing meaningful input into how their community in partnership with local law enforcement combats crime. The basis for the success of this community policing approach is that the locals feel as though they are taken seriously, and that means cooperation.

“Many American police departments champion the same tenets that originated with Peel.”

According to the sergeant, “the team could be discussing a bike theft, parents dropping kids off at school too early, noise pollution, or garbage overflowing—small little problems that will get a proactive approach. When you come home and the community hallway latch on the door is busted, we want to hear about it. The public is very concerned with local issues. The decision-making process of the ward panels directly reflects our efforts in the area.”

The ward panels are especially popular in Westminster because the vast majority of people in the neighborhood during the day are tourists and commuters. Through the Safer Neighborhoods team program, the Westminster police force can gain an accurate picture of who lives in the area and the types of people coming and going. 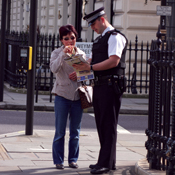 The program was not established overnight. The Safer Neighborhoods program started by putting officers into the community with the sole purpose of contacting as many people as possible and explaining the program. Officers knocked on doors for 6 weeks and spoke to numerous ward citizens. Officers left calling cards for residents who were not home, providing information about the problem solving team’s mission.

The sergeant explained that officers support the program because it gives them a personal connection to the community and its citizens. The officers also like it because they can put a face on local law enforcement and let people know they really care about the place where they work. The elderly residents who do not get a lot of visitors or go out much are especially receptive because it keeps them in the loop as to what goes on where they live.

The Safer Neighborhoods teams also disseminate information. If there is a disturbance or fight at a local pub or a screaming match between two people, the team will take the time to investigate the particulars and distribute flyers to explain what all the noise was about so that people do not start rumors or get the story wrong. According to the sergeant, community policing and information sharing is a two-way street, and officers would not have it any other way.

In 2005, four suicide bombers executed a coordinated attack on the city’s transportation network, killing 52 and injuring 784. In 2011, an underground train was stopped, and passengers were evacuated due to a suspicious device. With countless visitors every year, London faces the same public safety challenges that any major Western city faces. If terrorism is in the news, the ward panels want to know what is being done to combat it; however, the panels are more concerned with local issues. If an elderly woman is robbed at 9:00 or 10:00 at night while leaving a restaurant, the panels are more interested in that than in terrorism. This lends credence to the Peelian principles that focus on community policing.

The Nine Peelian Principles of Law Enforcement, still in effect today, hold that the police are the people and the people are the police. Robert Peel’s principles revolve around the concepts of community service, community safety, service of the people, pride, and professionalism. American police departments hold that the goal of community policing is to promote partnerships between communities and local police and to encourage cooperation between local residents to address and solve problems in the community. Examples of American community policing can be seen in Neighborhood Watch programs and Citizen Academies throughout the country. Today, police departments, both in the United States and abroad, still champion the same tenets that originated with Peel.