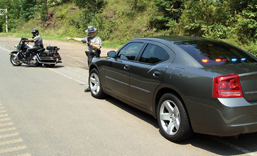 According to FBI reporting, 2011 represented a deadly year for law enforcement officers killed while deploying spike strips to end dangerous high-speed pursuits. The use of spike strips began in 1996. Since that time, drivers have struck and killed 26 law enforcement officers, five in 2011—the most since 2003, which also featured five officer deaths.1 In at least one of the 2011 deaths, an offender intentionally struck an officer.

To place such tire-deflation devices, “the officer must be positioned somewhere ahead of the chase...and park his vehicle on the side of the road, exit the vehicle, and then deploy the strip across the roadway in front of the suspect.”2 And, doing so “is a real danger for law enforcement officers. Offenders who are fleeing from pursuing officers have no concern for other motorists, let alone the officers chasing them or attempting to stop them.”3 According to one expert in law enforcement driver training and tire-deflation devices, “While these tools can ultimately make a pursuit safer for the community, there is an element of danger in using them. Officers should take great caution when utilizing any tire-deflation device.”4

In view of the dangers associated with spike strip deployment, law enforcement agencies should weigh other options, such as the pit maneuver, to end high-speed chases. Departments also can consider the increased use of aerial surveillance to track an offender’s location relative to that of an officer placing the spike strip. Moreover, radio communication could help confirm that a subject is too far away to reach the location of an officer during deployment. Further, new technology that could disable cars involved in high-speed chases may reduce the risk to officer safety.