From Addicted Person to Public Servant

From Addicted Person to Public Servant 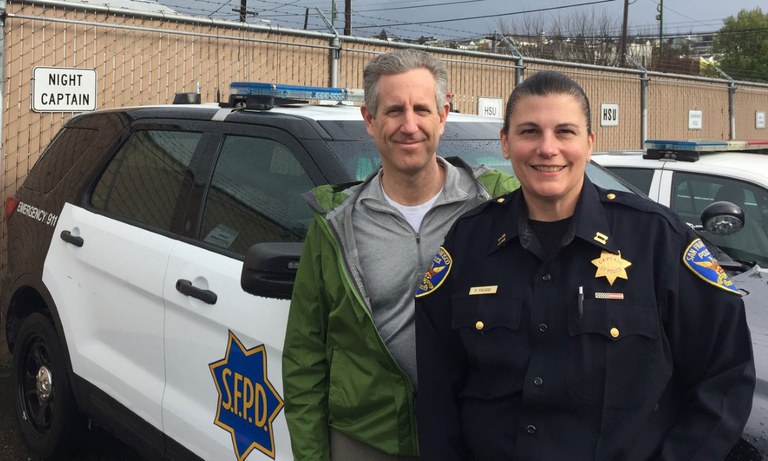 You have never met me, but you knew me all too well. Every day, you encountered me in your jail cells, booking rooms, and squad car back seats. You were summoned by frightened citizens who witnessed me shambling the sidewalks, high on drugs, engaged in screaming matches with people who were not even there. You were called to intervene when I was caught breaking into my relatives’ homes to steal for drug money.

But, you may not know that thanks in large part to your help, I turned my life around. Today, I almost certainly am the only person ever who once was arrested by the FBI and then went on to receive a community service award from the Director.

My name is Ed Kressy. During the course of my devastating 11-year addiction to methamphetamine, I drained the resources of law enforcement. My actions compelled police to arrest me, search my home and vehicles, and lock me in the psychiatric ward. Even after I became clean in 2007, ongoing mental health challenges resulted in my deep mistrust and fear of law enforcement. I believed the FBI or the San Francisco Police Department (SFPD), perhaps both, architected a vast conspiracy to strip me of my rights, leave me destitute, or send me to prison for life.

I experienced many low points. One day, I found myself occupying a plush chair in the lobby of the FBI’s San Francisco office. On my lap, I held an electronic device I believed had been bugged by those behind the “conspiracy.” I was something of a regular in that lobby, showing up with desperate pleas for help or solemn requests that the FBI end its surveillance of me. I did the same at SFPD stations and once even at the Secret Service office. The FBI arrested me in its lobby after I pushed my luck too far and arrived there—a bench warrant was out for my arrest. Young, fit agents surrounded me and placed me in handcuffs as a startled passerby stared at the spectacle I had made of myself.

There are other memories. One midafternoon, I crossed the parking lot of San Francisco General Hospital and Trauma Center. A sheriff’s deputy escorted me to the locked psychiatric ward as I wore a belly chain and ankle cuffs. I had refused to cooperate with SFPD officers after they found me twisting a random key in the back door of my family’s home. I was attempting a repeat performance of my previous day’s break-in and theft of valuables for meth money. After being arrested, I demanded to speak to the FBI (at times, I believed I was a top secret undercover FBI operative).

I recall details from those experiences and others like them. The way the belly-chain steel dug into my midsection as the ankle cuffs prevented all but shuffling steps. The humiliation as SFPD officers arrested me in full view of my family’s neighbors. The shame from the citizen’s stare in the FBI lobby.

But, what stays with me even more—the memories that guide me today—are the kind words uttered by those officers, FBI agents, and sheriff’s deputies. The sympathetic look in the eye of the FBI agent as she reassured me that someone would take care of my dog. The tone of genuine regret in the sheriff’s deputy’s voice when he said he could not oblige my request for a cigarette. The friendly smile on the face of the SFPD arresting officer as he invited me to call him by his first name, Jim.

Law enforcement personnel viewed me as human, and I began to nurture my humanity. I found the strength not only to quit meth but to contribute to society. I volunteered as a disaster preparedness instructor for the Red Cross and as a first responder for the San Francisco Fire Department. I earned an EMT certification, participated in dozens of disaster preparedness trainings and scenarios, and went on ride alongs with fire department paramedics. Today, I stand ready to serve emergency services should they become overwhelmed by a disaster.

After becoming a self-defense instructor, I went on a ride along with the Oakland Police Department. The officers taught me ways to train my students to reduce the likelihood of becoming victims. Eventually, I volunteered for the FBI. I trained some of its SWAT team members in unarmed self-defense to enhance agent safety. From there, I was selected to attend and graduated from the FBI Citizens Academy in 2018.

Along the way, I discovered that just because you are done with drugs, that does not mean drugs are done with you. A lingering psychosis-like condition made me fearful of the FBI and police. Yet, due to the kindness and respect with which people in law enforcement treated me, I developed the courage to overcome my fears.

One day in 2018, I found myself back in the same FBI lobby in which I had been arrested, occupying the same chair where I had sat with my “bugged” electronic. I was there to get fingerprinted—but not because of any criminal act I committed. I had been invited to a ceremony at FBI Headquarters in Washington, D.C. The fingerprinting was part of a standard background check.

Special Agent in Charge (SAC) John Bennett happened through the lobby. He recognized me from the citizens academy. SAC Bennett stopped to congratulate me. The reason for my invitation to FBI Headquarters was to be recognized by Director Christopher Wray with his FBI Director’s Community Leadership Award. The ceremony was honoring me, along with 56 of my fellow Americans. Yet, just as much, the ceremony honored those people in law enforcement whose kind words led me along my path.

Director Wray recognized me for providing leadership to help law enforcement connect with members of society suffering from substance addictions and for working to reduce recidivism rates in the San Francisco Bay Area. In the days and months following, I published two articles in a major newspaper promoting positive perceptions of the FBI and SFPD. Recently, I volunteered giving motivational talks to SFPD officers. I volunteer in maximum-security prisons and jails, coaching incarcerated persons to develop skills in earning legal income and obeying the law.

“...thanks in large part to your help, I turned my life around.”

My work builds bridges of trust between law enforcement and marginalized communities, helping to improve and heal society’s wounds. My writing and speaking inspires others as to the possibilities for society when law enforcement and communities affected by incarceration and addiction support one another. My audience numbers well into the thousands.

It all started with a few kind words from officers.

You may be thinking, I’ve extended kind words to those I’ve arrested, and what came back to me in no way resembled gratitude. My heart goes out to you. To my utter shame, I have been the person displaying lack of gratitude. Remember Jim, the officer who arrested me outside my relatives’ home? I repaid his kindness with disrespectful words and actions. Yet, his and others’ kindness stayed with me and eventually sunk in.

I could have chosen to focus on the way the belly chains cut into me and how it felt to be arrested in public. Honestly, and to my regret, I did focus on those things for a long time. There probably is no ideal way to be detained by law enforcement. Yet, many of the personnel who detained me also gave me gifts—their kind words. Whether or not I chose to use or even appreciate their gifts was up to me. They remained better people through their acts of giving, especially because they did so when I was at or near the lowest points of my life.

You know all too well the frustration, anger, and grief caused by people like me—or, rather, the person I once was. It is painfully real. Yet, you can choose to extend kind words to a person like I was. You can remind yourself that one kind word from an officer is like 50 kind words from anyone else. And, when you put forth kind words, you never know how many people they eventually will reach.

“It all started with a few kind words from officers.”

Ed Kressy is a writer, speaker, and volunteer whose work serves addicts and people with criminal histories. He can be reached at ed.kressy@icloud.com.